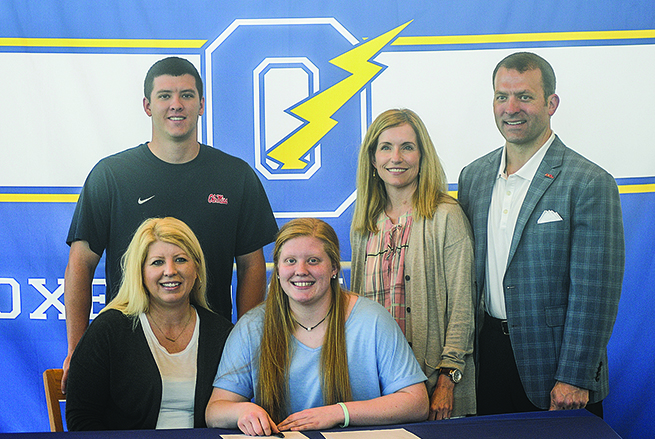 Last October, Maggee Hobson had one of those major decisions we all come across in life. If she wanted to continue her volleyball career past high school, she was going to have to put aside her final season of basketball at Oxford.

It was a decision that has paid off months later with Hobson signing with Tennessee Wesleyan University and becoming the newest member of the Bulldogs’ volleyball team. The desired outcome came true, but it is a decision that Hobson struggled with immediately.

“I cried my eyes out,” Hobson said. “I remember talking to (Oxford girls basketball) coach (Cliff) Ormon and he was like, ‘Are you sure?’. I had to commit to this to pay for my school and to follow my dream of being a college athlete, playing volleyball.”

The choice to forgo her final year on the basketball court stung a little more after hearing the news of the car wreck that injured Taliyah Gross and Tiara King, ending their senior seasons before they even began. With them recovering from serious injuries and Hobson choosing to play club volleyball with the Memphis Metro, it left the Chargers without any seniors on the roster. It was something that kept her from watching her friends play basketball until finally going to a game during Thanksgiving break, even then it was tough to sit in the stands for Hobson.

“It made me feel like, ‘Gosh, did I make the right choice?’” Hobson said. “I couldn’t even watch them play. It made me sick. I was (at the game) for maybe 10 minutes then had to leave. I couldn’t do it. That was my team out there and I was not battling with them. I texted my mom and dad in a group message and said, ‘I think I made the wrong choice.’ They said, ‘Maggee, just let it play out.”

Hobson did play it out and stuck with the Metro team, helping her get noticed by Tennessee Wesleyan head coach Ashley Harris. The reigning 2017 EAGLE Player of the Year went to visit the school in Athens, Tennessee, just north of Chattanooga, on February 3. She made her decision to sign with the Bulldogs about a month later in March, right before Spring Break.

“The coach, the place and the surroundings,” Hobson said of what drew her to Tennessee Weselyan. “It’s a really small environment, which I think will be good for me. It’s a change. It’s a big change, but I’m ready.”

Hobson will be asked to be the Bulldogs’ outside hitter, which is something she excels at, having 278 kills her senior year, as she helped bring a state championship to the Oxford volleyball program for the first time in 18 years last Fall. The current roster does not have any outside hitters, giving Hobson the chance to start immediately, something Harris recruited her for specifically.

“This has been her dream the whole time,” Former Oxford volleyball coach Tara Ross said. “I’m just so excited she found a place for her. She’s going to do great and grow, not only in the game of volleyball, but emotionally. It’s going to be great for her.”