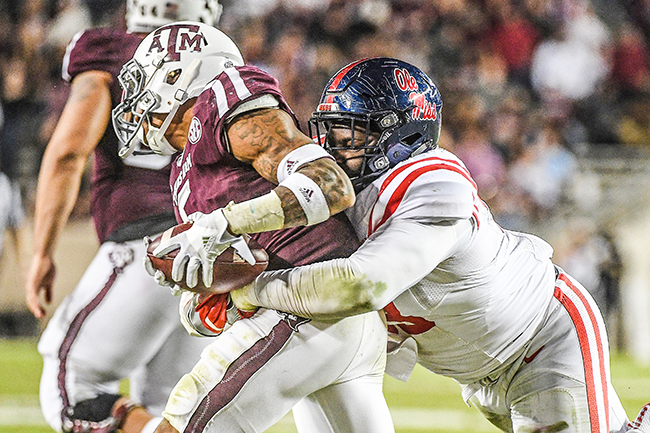 At 313 pounds, D.J. Jones has the prototypical weight for a nose tackle, though being just 6 feet tall is far from ideal.

Jones is counting on the way he moves to make up for it at the next level.

“That’s what I’m working on,” Jones said. “Just being 313 pounds and being able to run, that’s a plus for me. If I continue to do that, it will help me out.”

Ole Miss’ former nose tackle also displayed his strength at the school’s pro day Monday, knocking out 28 repetitions of 225 pounds on the bench press. But his focus is on showing NFL teams the kind of quickness he needs as an undersized interior lineman, something he thought he displayed during the main portion of his workout.

“Just showing my acceleration in the field drills,” Jones said.

Jones, who played two seasons at Ole Miss after transferring from East Mississippi Community College, flashed that quick first step during his time with the Rebels, finishing with two sacks, three tackles for loss and 30 tackles while starting all 12 games as a senior. He had 5.5 tackles for loss and finished second on the team with four sacks his junior season.

He earned an invite to the NFL scouting combine in February where he said he met with every team. He’s got a meeting with the New York Giants set for April 17 and said he talks frequently with the Tennessee Titans and the Oakland Raiders before correcting himself.

Jones said the conversation with every team usually comes back to his combination of swiftness and versatility as a run-stopper. Jones has the ability to play either the 3-technique (lined up over the outside shoulder of either guard) or “shade” the gap between the guard and center.

“My stocky frame. Just being able to take on blocks whether it’s two or one,” Jones said of the feedback teams are giving him about his skill set. “My quick feet, my ability to move at my size and the ability for me to play the shade and the 3-technique.”

Jones said he’s heard he could be drafted as soon as the third round or as late as the sixth. NFLDraftScout.com projects Jones as a seventh-round pick or an undrafted free agent, ranking him the No. 24 defensive tackle and 257th overall prospect for this year’s draft, which will be held in Philadelphia starting April 27.

Any round would be fine with Jones. He’s enjoying the experience.

“Just taking everything in,” he added. “It’s been a good process. Just a blessing to be here.”