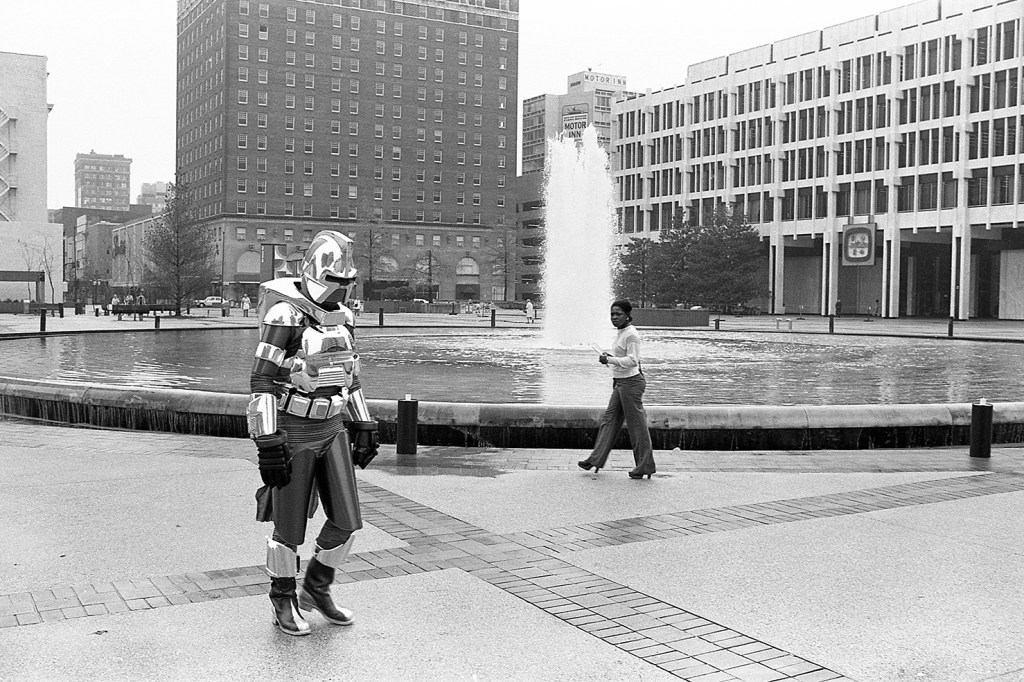 Actor Larry Dexter in original Centurion costume crosses the Civic Center Plaza after visiting kids at St. Jude Children’s Research Hospital on Nov. 16, 1978. The photo is part of the show “On The Street: Memphis 1977-1983” that will be on display at Bozart’s Gallery now through June.

After half a century as a professional photographer, Jack Gurner, will be the featured artist at Bozarts Gallery in Water Valley beginning in April.

The show, “On The Street: Memphis 1977-1983”, features black and white photographs from Gurner’s time with the Memphis Press-Scimitar. The opening reception is on Friday, from 6 until 9 p.m. at the gallery on Main Street.

Gurner earned his first money from photography making pictures during his senior year at Water Valley High School. “I had been taking photos since I was ten-years-old and was hooked,” Gurner said. “But, I really didn’t think of it as a career until my high school years when I sold some pictures to friends.”

His first job was with the North Mississippi Herald as a “printer’s devil” doing odd jobs such as cleaning presses and melting lead. Gurner also took a few pictures at school for the newspaper. “Seeing those first photos in the Herald sealed my fate,” he added. “I wanted to take photos for newspapers and magazines.”

After high school graduation in 1967, Gurner got a summer job with the Office of Public Information at the University of Mississippi. “I worked with Ed Meek and photographer Jack Cofield at Ole Miss. It was a real job in photography. It was an adventure,” said Gurner.

“Unfortunately, I was more interested in working than going to school, and it appeared I was going to be drafted,” he said. “I signed up for the Air Force and was able to get into the photo career field.”

Gurner spent his Air Force time as a photographer, including a year in Southeast Asia as a combat documentation photographer. After returning to civilian life, he worked at the newspaper in Grenada, The Daily Sentinel-Star, before landing his dream job as a staff photographer for the Memphis Press-Scimitar.

“I was in Memphis for my final interview the day Elvis died in August of 1977. I went to work in early October and it seemed like every other assignment had something to do with Elvis,” said Gurner. “I was the first photographer allowed in Graceland before it was opened to the public. I wandered around shooting color photos for half a day.”

Being a photographer for a metropolitan newspaper meant something new with almost every assignment, according to Gurner. “I never knew where they would send me or who I would be photographing once I got there,” he added. “I ran through the Memphis airport with O. J. Simpson, followed President Gerald Ford around the golf course, and watched Andy Kaufman wrestle at the Mid-South Coliseum.”

Gurner also had a couple of encounters with former President Bill Clinton. “I was covering the Democrat’s mid-term national convention held in 1978 when this guy joined a group of reporters and photographers in the hallway. Once he began to talk, he grabbed everyone’s attention. He was half charismatic preacher and half used car salesman. I backed off and took a couple of photos. I figured he was going to be someone in politics someday. He was the little-known attorney general from Arkansas, Bill Clinton.”

Later, after Clinton became Arkansas governor, Gurner had a couple of more encounters with the future president. “I got a radio call to go to the Peabody Hotel on my way to work one morning. The governor was making a visit to ‘far eastern’ Arkansas and was staying at the Peabody. The newspaper had a connection at the hotel who let us know when someone big was staying there. I got a couple of photos of Clinton walking out to the Arkansas Highway Patrol car. After about the third time I met him there, he would point at me and grin.”

Photographs of the famous and not-so-famous are among the images that will hang on the walls at Bozarts for Gurner’s show. “I picked that period of my career because some of my favorite photographs were taken during that time,” he said.

Gurner warned that these aren’t pretty pictures in many cases and may be disturbing to some viewers. “They represent the daily life of a big city, which includes crime, accidents, and some of the unpleasantness that is all part of Memphis,” he noted.

Because of their historical significance, the images and others from Gurner’s collection will be turned over to the University of Memphis Libraries’ Special Collections, which currently houses the Memphis Press-Scimitar files.