Oxford on the Move: Sammie Smith is finding a purpose after prison 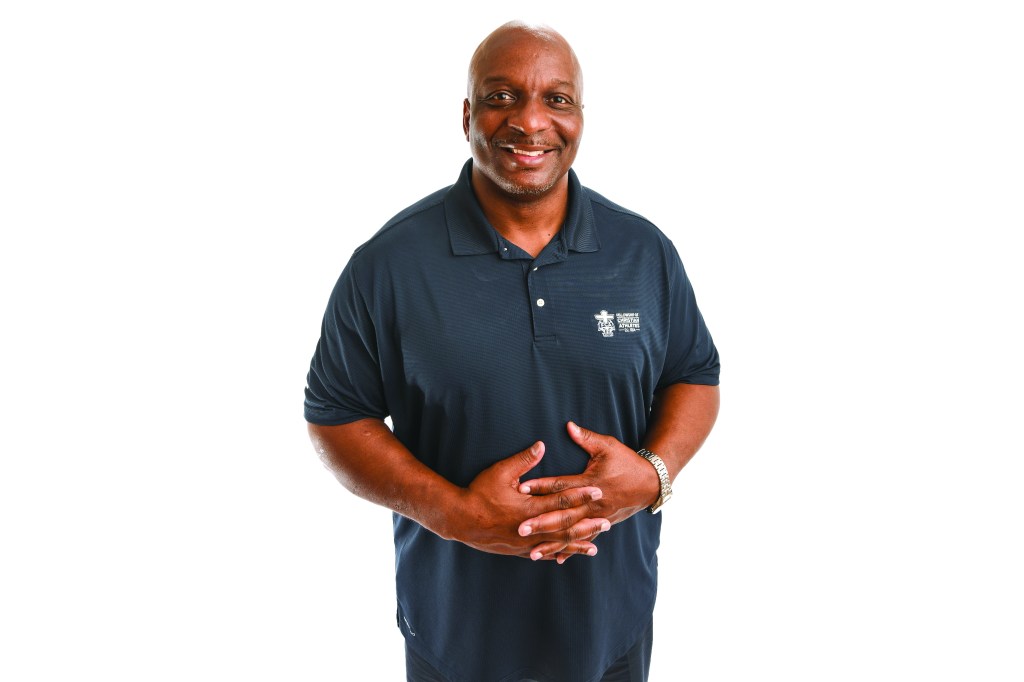 Sammie Smith was a college football star who set school records and played at Florida State University under legendary coach Bobby Bowden. But that certainly was not his purpose in life. It was just the beginning of a complicated journey that would lead to a place of helping others.

Smith, a native of Apopka, Florida, now works as the Fellowship of Christian Athletes Director of Character Development for Ole Miss Football. It was a job he accepted last spring, moving to Oxford during the summer – another chapter in what has become quite a journey.

A 230-pound standout at Apopka High School where he was named Offensive Player of the Year, Smith, now 50, had offers from some of the nation’s top college football programs, but felt Florida State was the ticket.

“I got to know Coach Bowden from going to football camps,” Smith recalls. “I started going there when I was in ninth grade. … I tell people all the time that one of the most treasured things that I take away from my college experience really was having the opportunity to play for a coach that viewed me more than just a player on his team. He loved his players, he poured into us and instilled values into us. He’s probably the most influential man in my life outside of my dad.”

Smith set a school rushing record of 1,987 yards in ’87, a record that stood until Warrick Dunn broke it in 1995. His production did not go unnoticed as Smith was selected by the Miami Dolphins with the 9th overall pick in the 1989 NFL draft. He played four seasons in the NFL with the Dolphins as well as the Denver Broncos. It was then that Smith’s life started taking a downward turn. In 1990 he lost his two-month-old son, Jarrod, to infant death syndrome. Six years later, Smith was in trouble with the law after being arrested and convicted for two counts of possession and distribution of cocaine.

They say that prison changes a man and in Smith’s case it was for the better and it was the first night he found himself behind bars after his 1996 arrest.

“I got involved with some friends that were involved in shady stuff,” Smith says. “It certainly wasn’t how I was raised and how I was brought up. … That first night, it was like, ‘What have I done? How have I allowed something like this to happen?’ God clearly showed me. It wasn’t just that situation, but man, I had lost a son when I was playing with Miami and I think that was a situation that God was trying to open my eyes.”

In 2003, Smith was released and had his rights restored thanks to the help of Bowden and others speaking on his behalf to the Florida Clemency Board. During his seven years in prison, Smith found religion and turned to God, knowing that he was not meant to be sitting in a cell with the gifts that had been given. Time passed and Smith found his way into the FCA with speaking engagements all across Florida.

Smith and his wife, Shalonda, started a business in Florida called Kingdom Impact Sports. It was a training facility for local kids to come and train while also allowing Smith to create relationships and become a positive impact in their life. When he was speaking at an event last March in Ocala, Florida, an Ole Miss alum was in attendance and wanted to find a way to get Smith to Oxford and become a part of the FCA program on campus. A close friend and former chaplain at FSU had spoken at a previous FCA Breakfast event at Ole Miss. The connection fueled an eventual phone call from football head coach Hugh Freeze.

Smith was still hesitant to relocate his family and life after starting what had become a successful young business. While at a hotel in Jackson around the now infamous 2016 NFL Draft, Smith was starting to get phone calls and texts from friends once the news about former Ole Miss and current Dolphins’ offensive lineman Laremy Tunsil came out on draft night.

“I’ll never forget waking up that morning,” Smith says. “I see Ole Miss all on the news and I’m like, ‘What’s going on?’ I turn my phone on and I got texts from the previous night from friends, ‘Man, what are you getting yourself into?’ I didn’t know what they were talking about and then I saw the draft stuff. That was like confirmation for me and my wife that God has work for me to do there.”

Smith took the job immediately thereafter and has worked with Ole Miss athletics ever since. A man who once had it all and lost it saw another young player who was potentially about to lose it all himself and a program that was in need of his help. Luckily for the Rebel athletic department, Smith has plenty of life experience to rely on.