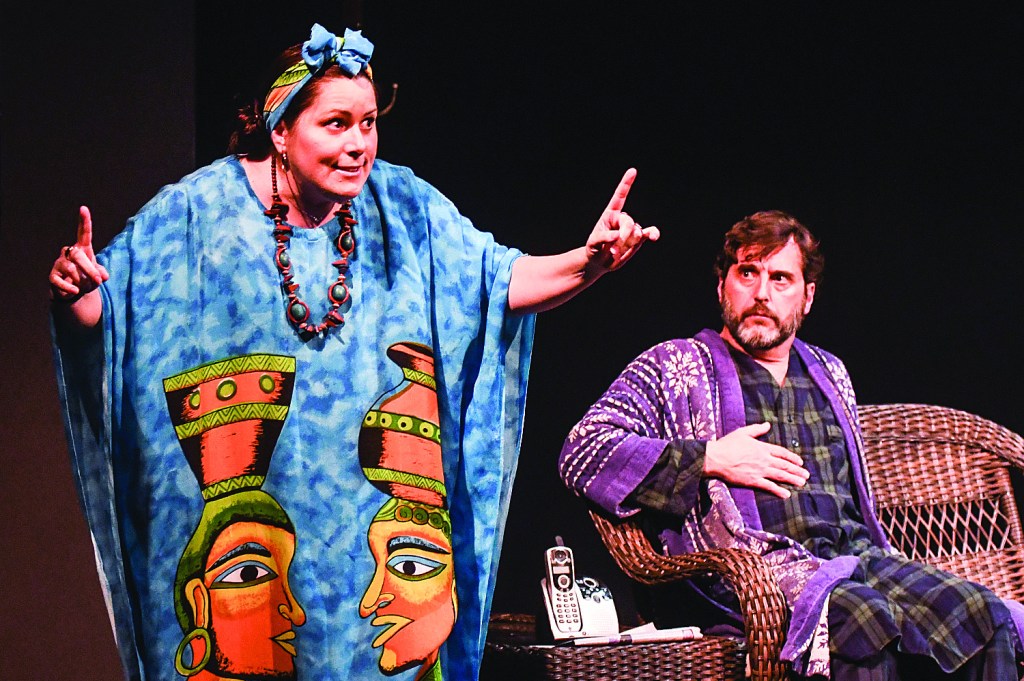 Mevelyn Fernandez as Cassandra, left, and Christopher Schager as Vanya rehearse for Theatre Oxford's presentation of “Vanya and Sonia and Masha and Spike,” being held April 6-9, 2017 at The Powerhouse Community Arts Center.

“Vanya & Sonia & Masha & Spike” opens Thursday night at 7:30 p.m. at the Powerhouse with shows also Friday and Saturday at 7:30 and a 2 p.m. matinee on Sunday. Tickets are $15 for Theatre Oxford members and $20 for non-members.

“Vanya & Sonia & Masha & Spike” is set in Pennsylvania. Two siblings, Vanya and Sonia, mourn their current lives and the loss of their parents when their maid, a fortune-teller, warns them of impending dangers.

Their sister, a successful actress, Masha, and her boy toy, Spike, arrive unexpectedly for a weekend where Masha informs her siblings that she will be selling their house and their nine-tree orchard.

This show runs for about two and a half hours with intermissions. The show is derived from the works of Anton Chekhov. It has been praised as a comedic adaptation of Chekhov’s themes that are distilled from his usual jealousy, angst and failure. People accustomed to Chekhov’s work will get to hear some of his famous lines, like “I am a wild turkey,” and will notice that the names are taken from his many other works.

This Tony award-winning play will showcase Theatre Oxford talent, both local and national.

Christopher Shager, a co-founder of Theatre Oxford and a member of an award-winning improv group, the Hooligans, returns to the stage as Vanya. Oxford resident Susan Cox, winner of the National Helens Hayes award, will play Sonia. Kate Hooper, a Theatre Oxford regular, will join the cast as Masha. Joshua Heylin, a Booneville native and Ole Miss Theatre performer, will appear as Spike.

After training at Stella Adler Studio of acting, Mevelyn Fernandez, a University of Mississippi professor, to play Cassandra. Faith Janicki will appear as Nina. The play’s director, Matthew King, returns to Oxford after an acting career in New Orleans where he was a member of the Screen Actors’ Guild.

The play will also help raise money for Team Fox, a grassroots fundraising program for Michael J. Fox’s Parkinson’s Disease Research Foundation. The director, Matthew King, and cast members, Kate Hooper and Mevelyn Fernandez, have family and loved ones that have been diagnosed with Parkinson’s.

Donations will be accepted for the duration of the play.