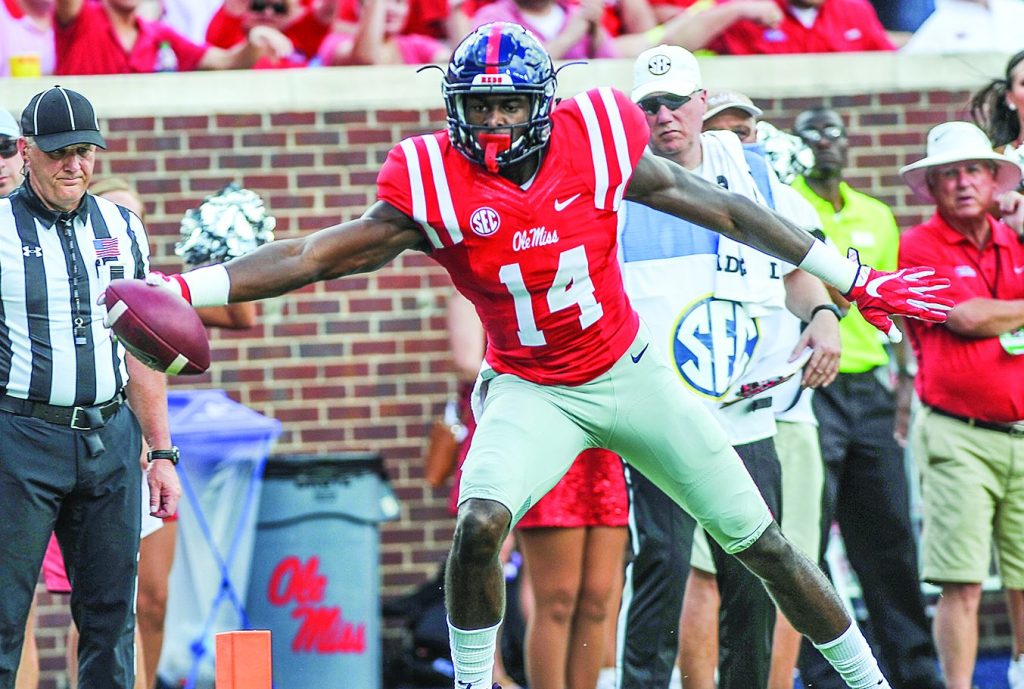 The various descriptions from his Ole Miss teammates indicate how much of a headache they think D.K. Metcalf would’ve been for defenses last fall had he been able to play the entire season.

“A freak,” running back Jordan Wilkins said. “An athlete.”

Said offensive lineman Javon Patterson, “He would’ve been a monster.”

They’re all getting a reminder of Metcalf’s playmaking ability this spring.

Metcalf is healthy again after a broken foot ended his freshman season after two games, and the Rebels’ big-bodied receiver is impressing much the same way he did in a short time a season ago. Metcalf, a former Oxford High standout, is by the far the biggest receiver on the roster at nearly 6-foot-4 and 220 pounds and has been a handful for defensive backs.

“He’s a basketball player that understands positioning in those tight quarters for red-zone throws and obviously has great strength, skills and size,” Ole Miss coach Hugh Freeze said. “You saw that in the (two) games he played. It’s hard to say what he would’ve developed into out in the field, but I think he’s got the potential to be a special player.”

Metcalf said he’s gone through the spring without any pain, something he had a lot of when he landed in Vaught-Hemingway Stadium’s north end zone after catching one of those fades for a touchdown against Wofford on Sept. 10. He didn’t think his foot was broken initially but knew something wasn’t right when he felt something while trying to walk.

“I was going to the sideline to see if it would just go away, but I started not to be able to walk,” Metcalf said. “I told (former receivers) coach (Grant) Heard, and he told me to go see (trainer) Pat (Jernigan).”

Metcalf said “it hurt” that his freshman season was cut short. He had quickly become a red-zone threat with his only other catch also going for a touchdown — an acrobatic, juggling 3-yard score — five days earlier in his collegiate debut against Florida State.

“It’s unbelievable what he could’ve done against other teams,” Patterson said. “I call him the fade-ball man. Throw it up to him and he’s going to go get it.”

But Metcalf channeled his energy into honing his game off the field. When he wasn’t in the training room rehabilitating his surgically repaired foot, he was usually in the film room with veteran receivers Damore’ea Stringfellow and Quincy Adeboyejo studying coverages and tendencies of opposing defenses.

“It really wasn’t tough because God puts you in situations for a reason,” Metcalf said. “I didn’t look at the negative aspect of it. I really looked at it as a time to grow and perfect my mental game.”

Yet it’s hard to miss Metcalf’s physical prowess, particularly as the one-on-one matchups become more enticing the closer the offense gets to the end zone with Metcalf towering over any cornerback he draws in coverage.

“He’s a weapon,” Wilkins said. “He can make almost any play anybody can make. You can just throw it up to him whenever, and you have an 80 percent chance of coming down with it.”

But Metcalf is working on rounding out his game this spring, particularly when it comes to running routes. Having a clean bill of health is helping with that.

“Everybody knows I can run the fade ball, but it’s really me trying to take my game to the next level with the curls, comebacks, slants, digs, everything,” he said. “Trying to get my center of gravity low so I can come in and out of breaks.”

The idea is to make himself a threat from anywhere on the field.

“He’s going to be a phenomenal player,” Freeze said.