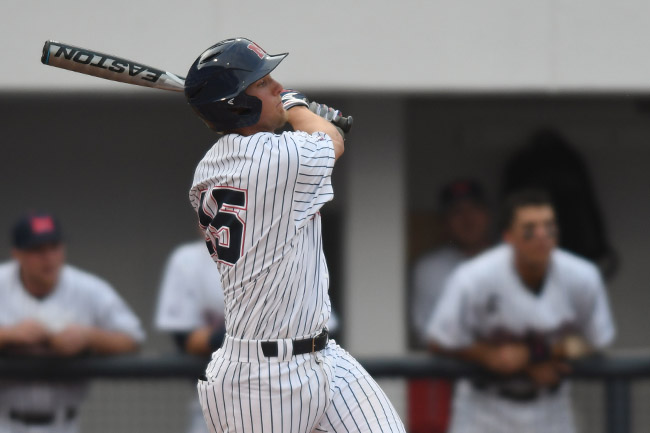 The Rebels are last or next to last in the Southeastern Conference in several categories heading into this weekend’s series against Alabama, including average (.242), runs (123), hits (226), RBIs (108), on-base percentage (.332) and total bases (324). Ole Miss scored three runs or fewer in each game of its sweep to Mississippi State last weekend, something the Rebels had done in 15 of 20 games before plating six in Tuesday’s win over Southern Miss.

Yet Ole Miss’ hitters insist they’re not discouraged. In fact, they said it’s quite the opposite.

“We’re a confident bunch,” freshman shortstop Grae Kessinger said. “It’s always good to see results and see a few runs across, which we’ve had trouble doing. I think overall we still believe we’re a good offense. We know we have a good offense, and it’s definitely going to come.”

They have their reasons.

Ole Miss (17-12, 3-6 SEC) had chances for more runs in all three games against the Bulldogs but again failed to get the timely hit more often than not, including the most frustrating missed opportunity in the series finale when Tim Rowe’s bases-loaded, two-out screamer down the first-base line was snagged by a diving Brent Rooker to end a one-run game. The Rebels had 11 hits and more than 15 baserunners against No. 17 USM in their midweek win, rallying from a 5-1 deficit in the final four frames to force extra innings.

Ryan Olenek had three of those hits to raise his average to a team-best .282 while the two upperclassmen in the middle of the lineup, Tate Blackman and Colby Bortles, have heated up. Bortles and Blackman are hitting .325 and .305 after starting the season 1-for-16 and 2-for-17, respectively.

“There’s a lot that goes into it when you step up to the plate and have runners in scoring position,” Blackman said. “It could be pressing because we haven’t scored many runs and we try to do a little bit too much when people are in scoring position and kind of chase their pitches rather than staying with our plan and hitting the ball that we can hit and get the guy in.”

Tuesday’s win didn’t come conventionally as freshman pitcher Jason Barber, who was hit by a pitch in his first-ever collegiate plate appearance, came around to score the winning run on a wild pitch in the bottom of the 12th to lift Ole Miss to a 6-5 victory, but Blackman said that’s not necessarily a bad thing.

“For some reason, when things aren’t going your way, that weird win or that weird hit or a bunt for a hit kind of gets you going again,” Blackman said. “I think that type of win is what’s going to get us going and put us back on track.”

The Rebels will be facing a team that’s dealing with its own struggles in Alabama (13-16, 2-7), the only team trailing Ole Miss in the Western Division standings. The series opener from Swayze Field is Friday at 6:30 p.m..

The Crimson Tide, whose RPI is 157, have lost six of their last seven games and nine of 12.

“All these SEC games are super important,” pitcher James McAthur said. “They all mean so much to your resume for postseason. It’s a big weekend for us. We just need to go out there and try to get Game 1.”

The offense will need to help if the Rebels want to keep their little bit of momentum going.

“You hope,” Ole Miss coach Mike Bianco said. “You hope you can build on it. We’ll see this weekend and as the season progresses.”

McArthur will be opposed by left-hander Dylan Duarte (2-1, 2.48) while Alabama will send right-hander Nick Eicholtz (1-0, 5.96) to the mound Saturday. The Tide have not announced a starter for Sunday.

It will be McArthur’s third straight start since missing a pair because of a forearm strain. Bianco said the sophomore righty, who scattered four hits and fanned five in a season-long 6 2/3 innings last Thursday against MSU, is getting his endurance back to where it was before the injury.

“He was good early (against Kentucky) but lost a little velocity when he got past 50 pitches or so,” Bianco said. “Didn’t see that as much in his last start. He looked strong.”