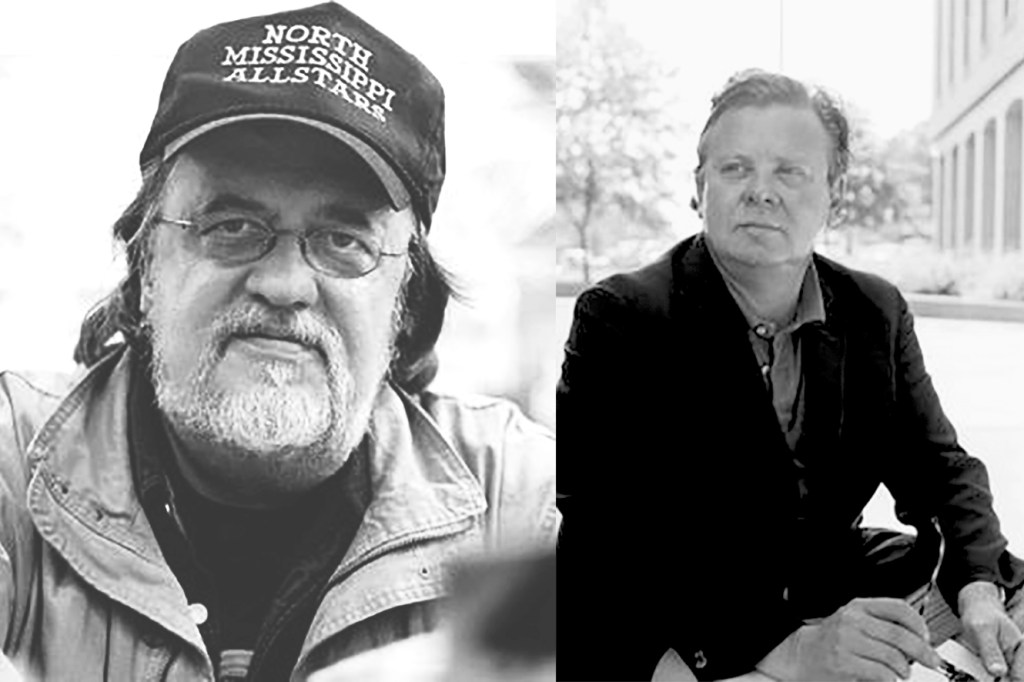 Jim Dickinson, left, and writer Willie Morris will be honored tonight during the Thacker Mountain Radio broadcast at Off Square Books.

The Thacker Mountain Radio Hour will honor two authors with close ties to Oxford on tonight’s show. Writer Willie Morris lived in Oxford from 1980-1990 and served as Writer-in-Residence at Ole Miss. Musician Jim Dickinson, whose credits include work with the Rolling Stones and Bob Dylan, served as bandleader for the Thacker house band, the Yalobushwhackers, from 2005 until shortly before his death in 2009.

Morris’s book of sports essays, “Always Stand in Against the Curve,” is being reissued by Yoknapatawpha Press., a southern regional press based in Oxford. Dickinson’s posthumous memoir, “I’m Just Dead, I’m Not Gone,” was published this month by the University Press of Mississippi. Morris died in Jackson on August 2, 1999. Dickinson died in Memphis on Aug. 15, 2009.

The two will be featured on the radio show at 6 p.m. at Off Square Books, represented by Morris’s son, filmmaker David Rae Morris and Dickinson’s widow, Mary Lindsay Dickinson. Admission is free. The program, hosted by Jim Dees and the Yalobushwhackers, can be heard locally on WUMS, 92.1 FM and online at www.myrebelradio.com. It will be re-broadcast on MPB radio (90.3 FM in Oxford) at 7 p.m. on Saturday, April 15.

In keeping with the family theme, the musical guest for the show will be Lilly Winwood, daughter of British rocker, Steve Winwood.

“I’ve never thought of Willie and Jim together,” says host Dees, “but I think they would have liked each other. They both were well-read and could tell a story. They both played piano. They both scaled the heights in their respective fields — Willie at Harper’s magazine and Jim becoming a close confidante of Bob Dylan. We look forward to celebrating them.”

Each of the autobiographical essays in “Always Stand In Against the Curve,” represent chapters of a sporting life: The opening piece is a novella, “The Fumble,” an epic account of a high school football player’s worst nightmare. In another essay, Morris recounts a college road trip to Notre Dame with “Bevo,” the University of Texas Longhorn steer. There’s also a hilarious account of Morris hitting an inside-the-park home run off Dustin Hoffman in a celerity softball game — and breaking his foot in the process.

“This is a book for those who shot baskets under a goal over a garage door or shagged fly balls in open fields until it was too dark to see the hoop or the baseball,” says Yoknapatawpha Press publisher Larry Wells. “It is quintessential Willie.”

Dickinson established the Zebra Ranch recording studio in 1995 near Coldwater. Mary Lindsay worked the business side of the operation that continues today. A former horse trainer and artist, Mary Lindsay recently earned a sixth-degree black belt in karate. She and Jim are the parents of Luther and Cody Dickinson, founders of the North Mississippi Allstars.

Dave Rae Morris’s photographs have been published in National Geographic, Time, Newsweek, USA Today, and The New York Times, among others. His most recent film projects include documentaries on late musician Duff Dorrough and civil rights pioneer James Meredith and Yazoo Revisited, an award-winning examination of school integration in his father’s hometown of Yazoo City. That film will debut on Mississippi Public Broadcasting television on Friday, April 28 at 8 p.m. Morris lives in New Orleans.

Following the broadcast, Morris and Dickinson will sign books and greet readers.