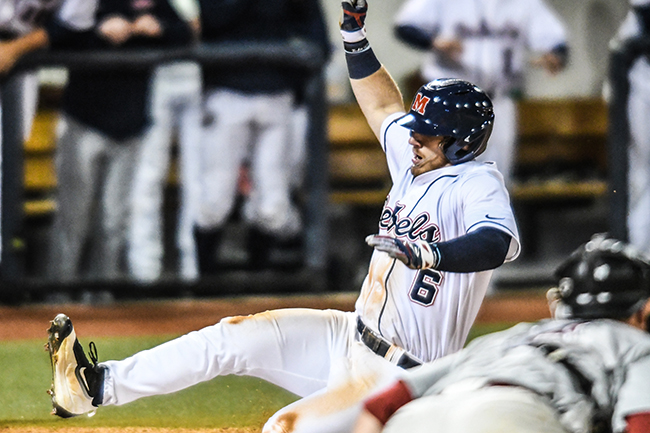 Ole Miss got more strong pitching Friday and eventually got the hitting to go with it.

The Rebels used a four-run fourth inning and a pair of home runs to propel themselves to a 7-2 win over Alabama in the teams’ series opener at Swayze Field. The win snapped Ole Miss’ five-game Southeastern Conference losing streak dating back to March 24.

Ole Miss, which had nine hits with five of them going for extra bases, scored seven of the game’s final eight runs after trailing 1-0 to give itself a rare cushion. It’s the first time since March 25 the Rebels have been involved in a game decided by more than two runs.

“When the offense is good, everybody is good,” said outfielder Ryan Olenek, who had two more hits and has nine in his last 18 at-bats. “Hitting is contagious. It’s pretty relaxing, but those one-run games are still pretty fun to be a part of.”

Will Golsan and Tim Rowe also had two hits apiece while Rowe drove in Ole Miss’ last two runs, including a solo homer in the sixth. Nick Fortes also went deep in the inning.

“I think the swings look different,” Ole Miss coach Mike Bianco said. “They’re more aggressive and confident, and that’s where when you talk about being contagious, that’s where it happens.”

Just one of the Rebels’ knocks came against Tide starter Dylan Duarte through the first three frames before Ole Miss (18-12, 4-6 SEC) got to the soft-tossing left-hander in the middle innings. The Rebels started the fourth with three straight hits, the last a double from Olenek to put Ole Miss ahead 2-1, while Colby Bortles and Thomas Dillard each had RBI doubles in the inning.

Fortes, getting his fourth straight start at catcher, ran Duarte (2-2) with a no-doubter over the bullpen in left to begin the home half of the sixth before Rowe pushed the Rebels’ lead to 6-1 with a pinch-hit shot off Mike Oczypok, giving Ole Miss multiple homers in the same inning for the first time since May 2016.

“His fastball was like 84 (miles per hour) and then he was throwing what looked like a slower fastball. It was doing the same thing, but it was like 80-82,” Olenek said. “We were just really working on staying back. Coach B pulled all the hitters in the dugout and he said, ‘Try to foul the ball over the first-base dugout.’ When you’re trying to stay that late, you’re still out in front on a guy like that. We were just trying to stay late and work flat the other way.”

Alabama (13-17, 2-8) used a throwing error by Tate Blackman to score a run in the ninth, but freshman Will Ethridge stranded two more baserunners to polish off a strong start by James McArthur (2-1), who settled in after a shaky first inning to turn in his longest outing of the season.

The sophomore right-hander walked the first two batters of the game to help Alabama score on Cobie Vance’s double play and uncorked three wild pitches in the first two innings but found better command of his fastball to allow just one baserunner over the next five innings. He retired 16 of the last 17 batters he faced, scattering two hits over seven innings while striking out seven.

McArthur has yielded just four earned runs and 11 hits in the three starts he’s made since rejoining the rotation after dealing with a forearm strain, lowering his earned run average to 1.85.

The teams will play the middle game of the series Saturday at 3 p.m.