Oxford on the Move: Dwayne Ingraham’s bakery serves up sophisticated Southern fare off the Square 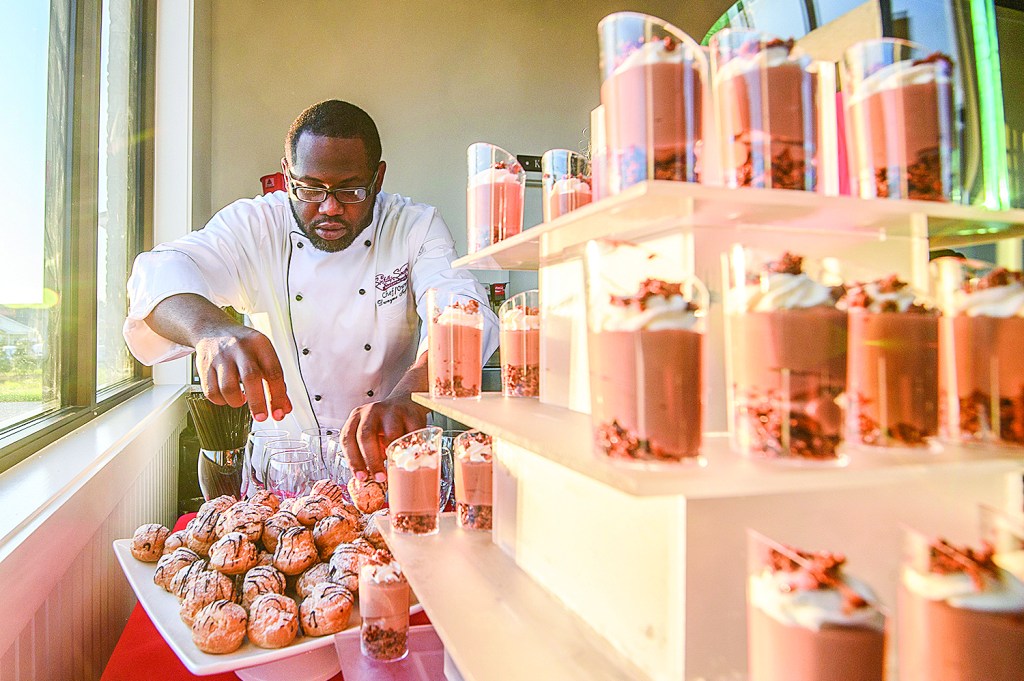 Dwayne Ingraham doesn’t consider himself an artist, but anyone who’s had one of his meticulously designed desserts would probably beg to differ.

Ingraham, the former pastry chef for City Grocery Restaurant Group, gained mainstream popularity following his 2015 win on Food Network’s “Cutthroat Kitchen.” Around here, however, he’s been a star for years. And now that he’s got his own place, the recently opened Sinfully Southern, that star continues to rise with a simple, sustainable focus on making good food rooted in regional flavor.

He makes no bones about the fact that his specialty and favorite thing to do is create delicious and beautifully plated desserts, but Ingraham’s vision for Sinfully Southern is rooted in the importance of community and family, much like the food he serves up on the menu. His first memories in the kitchen come from his childhood in Louisiana from his mother teaching him how to make breakfast to his grandmother and great-grandmother introducing him to Southern staples and large homemade meals offering everything from pot roast to gumbo and plenty of fresh vegetables to go along.

And so it makes sense that if he could host a dream dinner party with anyone living or dead, it would be his family — and it would probably be a potluck meal.

“My great-grandmother on my mother’s side made the best fig preserves and I would kill to get my hands on that recipe,” he says. “My grandfather made the best deer sausage. It would have to be older generations of my family just to sit down and hear stories about what food meant to them and discuss recipes that got lost along the way.”

Sinfully Southern, located off the beaten path near Faulkner Flats, is the latest chapter of Ingraham’s story with a menu anchored in sophisticated Southern fare with his personal influences woven throughout. The restaurant offers five signature dishes per meal — breakfast, lunch and dinner — along with an array of upscale desserts, pastries and baked goods.

His Louisiana upbringing is sprinkled throughout with muffulettas, decadent chicken and sausage gumbo and Ingraham’s clever take on biscuits and gravy, in which the “gravy” is a savory helping of crawfish etouffee.

But it’s the dessert menu where Ingraham’s talent really shines.

“What I love about plating desserts is the idea of having multiple components of it put onto a plate,” he says. “I love getting to allow people to experience what’s happening in my head when I think about this food.”

“When people think of s’mores, they see this ooey-gooey, cracker-y, chocolate-y thing,” he says. “Whereas I break it down like this: Graham cracker. Chocolate. The malt flavor inside the cracker. I see the bitterness of the dark chocolate, the creaminess of the marshmallow.”

With a food scene as varied and notable as Oxford’s, there’s an inherent intimidation that could arise when choosing to set up shop in town, especially after years of being part of John Currence’s culinary empire in Oxford.

Ingraham’s focus is on doing a handful of things in a sustainable way rather than trying to serve the masses at once. It’s this concept that keeps the menu condensed and the location off the beaten path from the Square or saturated Jackson Avenue.

“I think anyone who wants to open a business here wants to be on the Square,” he says. “What was important to me was being able to sustain it, to focus on that, and hopefully to become this neighborhood’s local restaurant, cafe and bakery.”

Upscale Southern food requires more forethought and attention than simply plopping a piece of catfish onto a bed of rice pilaf. It demands intention—from the ingredients to the preparation to the plating—rooted in regional flavor with 21st-century flair. And that’s exactly what Ingraham is trying to accomplish.

“This place was a dream of mine from the time I entered culinary school and realized this could be possible,” he says. “I love the idea of bringing these old Southern traditional values into a new age.”

Worth Knowing: He beat out everyone on Food Network’s Cutthroat Kitchen in 2015

Favorite thing about our community: “I love that it’s a community where there are some sophisticated things to it, but if you look deep you realize it’s still a very traditional, down-home place to live.”