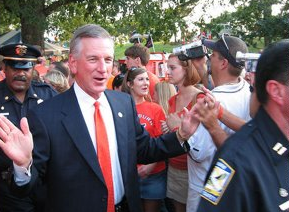 Tommy Tuberville has been called by different names over the years, including head coach.

In Oxford, Tuberville was called a traitor for the longest time. Ole Miss fans started calling him that after the then-Rebel football coach pledged publicly the only way he would leave town was in a pine box.

But days later he had his home in Grand Oaks on the market and had already purchased a new one in Auburn, where he had just become head coach for another SEC program.

After a decade of coaching at Auburn and subsequent stops at Texas Tech and Cincinnati Tuberville is now being associated with a different name: Governor.

Free from coaching after resigning at Cincinnati in late 2016, Tuberville has all but officially signed up to run for governor of Alabama, and many observers believe he will have a decent shot of winning from what is expected to be a crowded field.

Tuberville has been crisscrossing Alabama in recent weeks doing media interviews and meeting with key people and apparently has even already loaned himself $100,000 in campaign funds.

When asked if he’s running for governor Tuberville has all but said yes, using distinct coach-speak he parlays into political leadership lingo. He’s usually missing a word or two in sentences and he’s still got some twang in his voice, a throwback to his Arkansas roots, but he’s trying to sound more like a governor than a football coach.

“Because you got a lot of people who need to work, we got a lot of land, we got a port, we have all kind of resources, and energy,” Tuberville told my friend Joseph Goodman, a columnist in Alabama, earlier this week. “There are going to be a lot of possibilities, so I’d like to be a part of it. And, again, a governor is just a small part of it. But you got to be a leader, and leaders, to me, are guys who can see the future.”

He will still talk some football, and even addressed Ole Miss’ NCAA troubles in another recent interview.

“Hopefully, they can work through this, get everything rectified,” Tuberville said recently on a radio program. “Hugh Freeze is a good guy. It’s going to be hard to work through this, but I think he can. Just have to be honest. Whenever you have problems like this, you have to circle the wagons.”

Be honest. Circle the wagons. And maybe the NCAA will go away, says the old ball coach.

Mostly, though, Tuberville is glad he will be running for governor in Alabama, not Mississippi.

Alabama fans can vote, and they don’t have much history of supporting Auburn anything. They do like football everything, however, which may give the man who won six straight Iron Bowls from 2002 to 2007 an actual shot in his run for governor.

“Being the governor of a state’s not a game,” Tuberville said in another interview. “It’s real life. A governor makes a lot of decisions about whether people are going to have a better life or not as good a life.”

That’s coach-speak for this: Tommy Tuberville wants to be the next Governor of Alabama.