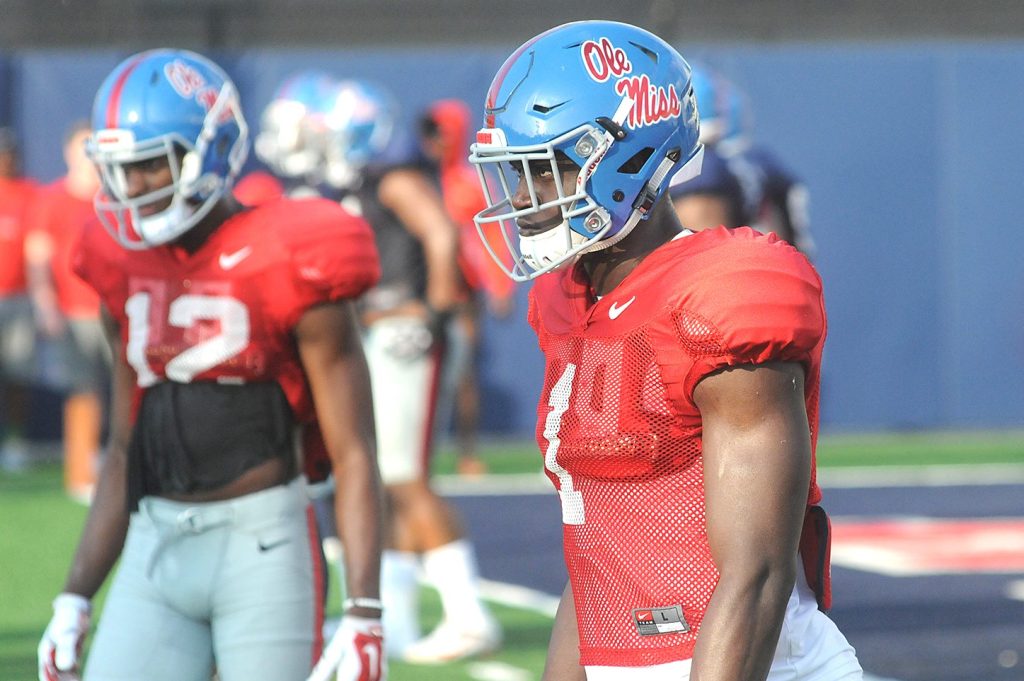 Jacob Peeler, who’s in his first spring coaching the Rebels’ wideouts, spent the previous two seasons coaching the same position at California before Sonny Dykes was fired in January. Peeler courted Brown and Metcalf heavily during the 2016 recruiting cycle and convinced each to take a visit to the school, making the Bears a factor in both of their recruitments.

“We were pretty close (to going to Cal),” Metcalf said with a smile.

Despite Peeler’s best efforts, Cal was always a longshot destination for the duo. Brown, the former Starkville High standout, visited Mississippi State and Ole Miss the week before he signed with the Rebels in February 2016 while Metcalf, the son of former Ole Miss All-American offensive lineman Terrence Metcalf, was a legacy recruit who committed to Ole Miss before his sophomore year at Oxford High.

But Peeler’s pedigree was enticing.

A Mississippi native who played his college ball at Louisiana Tech, Peeler helped Cal dip into the Southeast to sign some other wideouts. The Bears inked former Oak Grove (Hattiesburg) standout Jordan Duncan in 2016 as well as former Georgia prep star Demetris Robertson, the nation’s top-ranked receiver in that recruiting cycle.

Chad Hansen, Cal’s leading receiver last season, is widely projected to be a mid-round pick in this year’s draft.

Cal’s coaching staff wasn’t retained once Dykes was let go while Ole Miss needed another receivers coach in January when Matt Lubick left after 10 days on the job to be the offensive coordinator at Baylor. Ole Miss coach Hugh Freeze filled the position with Peeler, giving Brown and Metcalf the unforeseen chance to reunite with Peeler and continue relationships that began thousands of miles away.

“Me and D.K., we love that,” Brown said, adding that Peeler was the sole reason he had interest in Cal. “Actually me and D.K. was about to go to California, but it kind of worked out in our favor. He came back to be our coach, and we loved it. We love it every day we come to work. We’re happy because he’s our coach.” 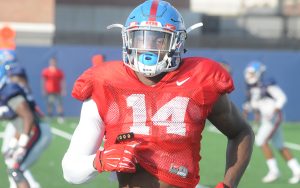 Oxford native D.K. Metcalf was a legacy recruit for Ole Miss but also had some interest in Cal because of Peeler. (Davis Potter)

The former four-star prospects could soon form one of the Southeastern Conference’s top pass-catching pairs. The 6-foot-1, 215-pound Brown caught 29 passes with two touchdowns and averaged 14.2 yards per reception as a true freshman while Metcalf, at 6-4 and 220 pounds, was a weapon in the red zone before a broken foot cut his season short with his only two catches for going for touchdowns.

Metcalf called Peeler “a technician” with a detailed coaching style. But the 33-year-old Peeler is young enough to relate to his players off the field as well, something both receivers said is a plus.

“He tells us he loves us every day, and coming from him, it’s really genuine and real,” Metcalf said. “I just look at him like a second father when my dad’s not here because I can talk to him about anything.”

Said Brown, “He never changes as a person. That’s what I like about him.”