Ole Miss’ defense has ‘a long way to go’ after spring 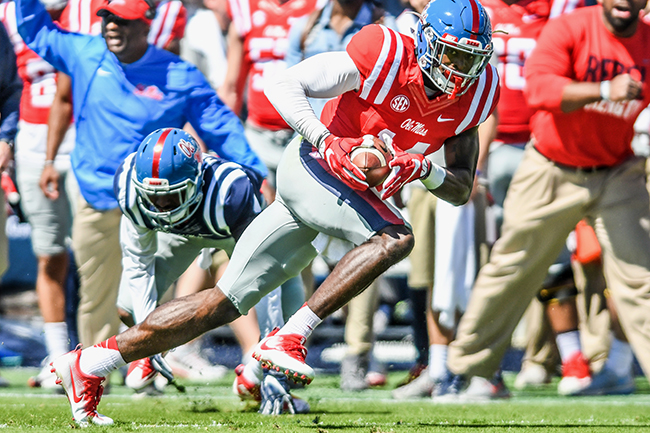 Rather than a traditional scrimmage, Ole Miss coach Hugh Freeze decided to pit the offense against the defense in the Grove Bowl and spotted the defense a 27-0 lead before the first snap.

It could add on by creating turnovers that resulted directly in touchdowns or field goals, but the defense generated just two more points on an errant snap that went for safety as the offense used big play after big play in the passing game to win 31-29 Saturday.

It left Freeze sure of only one thing on that side of the ball when it was over.

“We have a long way to go defensively, and we’ve known that,” Freeze said.

A much maligned defense that finished near the bottom nationally in several categories last season has a new leader in first-year coordinator Wesley McGriff, but some of the same issues that plagued the Rebels then popped up again Saturday.

Quarterbacks Shea Patterson and Jordan Ta’amu combined to throw for 529 yards and averaged 19.6 yards a completion thanks to explosive plays that resulted in touchdowns. Patterson threw touchdowns of 76 and 28 yards while one of Ta’amu’s six completions went for a 74-yard score to Van Jefferson.

Preventing the deep ball was a focus this spring after the Rebels allowed nearly 13 yards per catch a season ago. McGriff said the Rebels’ big-bodied receivers often challenged his group with deep shots in practice with the defensive backs winning at times and vice versa.

“We’ve still got a ways to go in that, but there was some progression in that area,” McGriff said. “I really like that mindset knowing that there’s no call we can make on defense to stop the deep ball. They’ve got to take it away by their performance.”

But Jefferson running by walk-on corner Jerry Johnson was the only instance where the defense was truly beat over the top.

Metcalf caught his touchdown just a few yards from the line of scrimmage before avoiding C.J. Hampton’s attempted tackle and outrunning everyone to the end zone. Brown then turned a slant over the middle into the longest score of the day when he escaped the grasp of Myles Hartsfield, plays that gave Freeze flashbacks to the tackling woes that haunted last year’s defense.

“We can’t miss tackles and expect to give up explosive plays and win games,” Freeze said. “We know that. We’ve experienced that for a year. That has to get corrected.”

It wasn’t all bad for the defense, which held the offense to an average of 3.1 yards on 54 carries. Presumptive starting running back Jordan Wilkins only got four of those carries as coaches didn’t play the rising senior much in order to get a look at some of the younger backs, but McGriff praised his group’s reaction to the running game.

“I felt real good about the communication, guys getting lined up the right way and being able to key and diagnose against the run,” McGriff said.

The impact play from the defense came from defensive back Cam Ordway, who pursued Metcalf on another catch and run late in the scrimmage to force a fumble that linebacker DeMarquis Gates recovered to prevent more possible points. Freeze said it’s that kind of energy and detail that’s improved under McGriff, but the defense is still trying to refine everything else to go with it.

“I think we gave up three (explosive plays) last practice,” linebacker Detric Bing-Dukes said. “That’s just mixing gaps. That’s fixable. I feel like we got better from last season to this spring at stopping the run and explosive plays.”