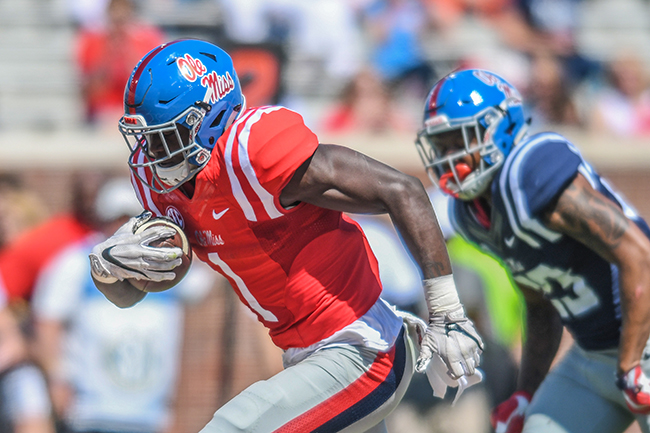 Yet it was the same explosive plays the Rebels have grown accustomed to in recent years that helped put the offense over the top.

The offense beat the defense 31-29 in the four-quarter scrimmage that brought Ole Miss’ spring to an end. Quarterback Jordan Ta’amu scored the deciding touchdown for the second-team offense on a 1-yard run with 4:48 left, but none of the offense’s first three scores covered fewer than 28 yards.

“I thought the right team won today,” Ole Miss coach Hugh Freeze said. “Thought the offense kind of controlled most of the scrimmage.”

Set to take the reins of an offense that’s led the Southeastern Conference in passing under Chad Kelly the last two seasons, Shea Patterson was sharp for the first-team offense, needing just 21 completions to throw for 341 yards and two touchdowns with no interceptions. Redshirt freshman Van Jefferson was the quarterbacks’ favorite target with six catches for 126 yards, but fellow youngsters D.K. Metcalf (four catches, 98 yards) and A.J. Brown (five catches, 133 yards) produced their share of big plays.

Patterson’s first scoring toss was a hot route to Metcalf on a corner blitz with Metcalf avoiding C.J. Hampton’s tackle near the line of scrimmage before outracing the rest of the defense down the sideline for a 28-yard touchdown. Patterson came back a couple of possessions later and completed a slant to Brown, who broke free from Myles Hartsfield and scampered 76 yards for the longest score allowed by the defense, which was spotted 27 points to begin the scrimmage and could add to its point total with turnovers and safeties.

Ta’amu, who went 6 of 11 for 188 yards, found a streaking Jefferson down the sideline on the next play for a 74-yard touchdown.

“To have those guys like A.J., D.K. and Van take off like that and get those (yards after the catch) like that, it’s just huge,” Patterson said. “It makes my job a lot easier. … The sky’s the limit for them, too. They will be as good as they want to be.”

The matchups weren’t always fair on the outside with both sides constantly shuffling players in and out throughout the scrimmage. With the Rebels’ cornerback depth already depleted without Ken Webster (recovery from reconstructive knee surgery) and Jalen Julius (fractured arm), Metcalf, Brown and Jefferson went against third-teamers and walk-ons at times.

“The defense is banged up,” Freeze said. “A lot of (defensive backs) out today. Look forward to getting them back.”

D.K. Buford was Ole Miss’ top rusher with 53 yards on 16 carries. The Rebels had 170 rushing yards and averaged just 3.1 yards per carry, but Freeze called it a “solid” performance from the running game considering how vanilla things were Saturday.

“What you saw today is probably the skeleton, or just the basic, package, and that’s what we wanted to do,” Longo said. “We ran about 12-14 plays. It was kind of our goal to manage spring ball and this game with x amount of plays, and we were disciplined enough to do that at the end. We tried to get it done within the playlist.”

Defensive end Markel Winters, fellow lineman Austrian Robinson, running back Eric Swinney and defensive back Montrell Custis were held out of Saturday’s scrimmage, but Freeze said all of them should be ready to go come fall camp barring any setbacks.

Swinney (ACL surgery) and Julius took part throughout the spring in non-contact drills. Tight end Jacob Mathis missed all of spring with a broken foot, but Freeze said the redshirt freshman is close to being cleared for contact.

Freeze said Webster, a starter when healthy, is also on track to be back on the field come August.

“That would be a guy that would really help our defense,” Freeze said.