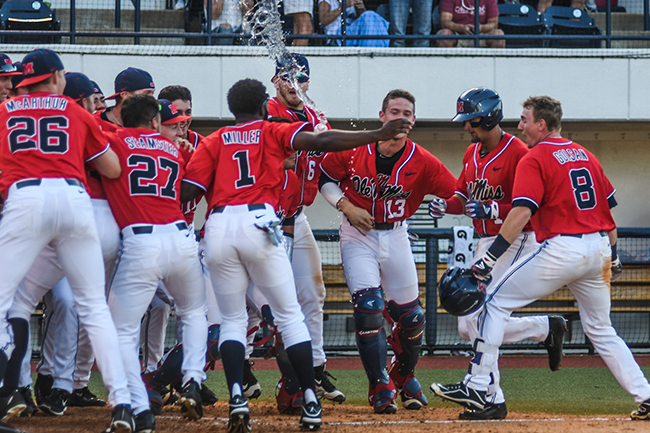 The offense has reappeared over the past two days for the Ole Miss baseball team, and it arrived at a key time on Saturday.

Second baseman Tate Blackman skied a hit into the left-field stands for a solo home run and a 5-4 walk-off win for the Rebels over Alabama at Oxford-University Stadium. The win clinched the weekend series for the Rebels (19-12, 5-6 Southeastern Conference), who will go for the sweep today at 3 p.m. The game will be broadcast on the SEC Network.

After plating seven runs in Friday’s win, the Rebels used seven hits to score the five runs on Saturday with Blackman’s first hit of the day being a timely one.

“The inning before, (Alabama pitcher Garrett Suchy) started with a slider in. So I was kind of looking for something middle-in,” Blackman said of the at-bat. “I just picked a zone. … I looked at the wind and I thought (the ball) was high enough. I just hoped the wind could carry it a little more. We didn’t play our best defensively, but we came ready to swing.”

Alabama (13-18, 2-9) used 10 hits and cashed in on four Rebel errors to score their four runs. The Crimson Tide jumped out to a quick 3-0 lead after 3 1/2 innings, roughing up Ole Miss starter David Parkinson for two solo home runs. Parkinson would exit the game after working 5 1/3 innings, giving up four runs on seven hits. He walked one and struck out four batters.

“I think the message that you take away is that we hung in there,” Ole Miss coach Mike Bianco said. “It could have gotten ugly and wasn’t pretty on the defensive side. David struggled. He struggled with his command, both breaking balls and his changeup. He hung in there.”

Brady Feigl worked two-thirds of an inning in relief of Parkinson and gave up only two hits. A key part of the game occurred when Will Stokes came in and had a bases-loaded situation in the top of the seventh with the game tied at 4. Stokes navigated the trouble with back-to-back strikeouts to get the Rebels out of the inning unscathed. Stokes worked 1 1/3 innings of one-hit baseball while striking out two and walking one.

“That was huge for (Stokes) and huge for us, too,” Bianco said. “Back-to-back strikeouts and did what he was supposed to do and what he’s done so many times. That’s why he’s in the game at that point.”

Dallas Woolfolk entered the game in the eighth inning, pitching the final 1 2/3 innings to earn his third win of the season.

After falling behind 3-0, the bats came alive for the Rebels, scoring a run in the fourth and three in the sixth to tie the game at 4-4. Catcher Nick Fortes went 3-for-4 with a run batted in. Left fielder Thomas Dillard, first baseman Cole Zabowksi and Grae Kessinger each had an RBI.