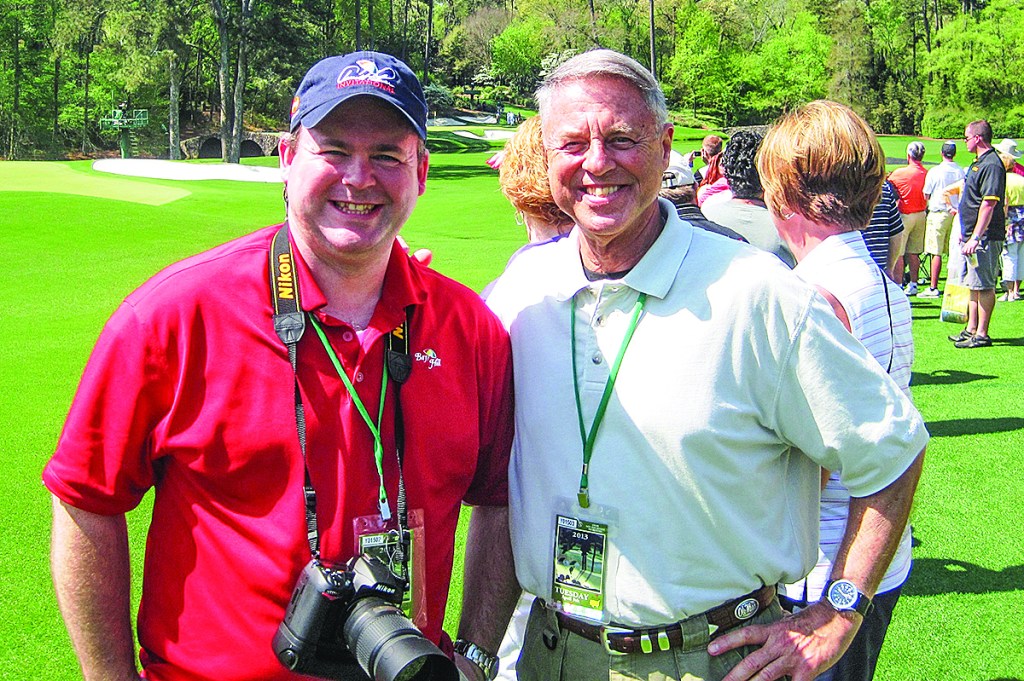 Tuesday’s practice round was significant because in March 2013, my son Stephen called and said that after trying for six years, he received two tickets for the practice round at the 2013 Masters and asked if I would like to go.

“Are you kidding, absolutely?!”

On Monday April 8, 2013, I drove to Birmingham, picked Stephen up at work, and we drove to Atlanta for the night (less driving and much cheaper than Augusta hotels). Tuesday dawned clear and as the sun peeked over the horizon we were well on our way to the Masters. We excitedly took exit 200 off I-20E, followed the well-organized traffic route, and minutes later parked for free in a grassy field a hundred yards from the Augusta National Golf Club entrance on an almost perfect, cloudless day that would reach 80 degrees with cool breezes. We were at the Masters for the first time!

The large Rolex clock above the gates indicated exactly 9:10 a.m. as we entered through airport-style screening stations. There is a lengthy list of rules and items banned from the Masters (including cell phones), which is fervently enforced. Cameras were allowed because it was a practice day, but a “no-autograph” policy was undeviating. Infractions of any of these rules would result in one’s pass being instantly revoked and banned from attending the Masters for life.

The Masters is satiated with tradition. There are no electronic score boards; prices for sandwiches and beverages has not changed more than a few cents for decades (a Masters club was $2.50, domestic beer $3.00); the course was immaculate and azaleas in full bloom dotted the course. Attention to detail was everywhere, the huge staff friendly, patrons polite, and everything flowed smoothly from the snack lines to the crowded fair-priced Golf Shop.

The course is unbelievably beautiful and quite hilly — not totally appreciated until being there in person and was a significant test for my 2011 replacement hips. Standing on the 18th green by the Clubhouse (the highest part of the course), one can look far down to the lowest area — Amen Corner and signature holes 11, 12 and 13.

Stephen and I were astounded being feet away from the world famous golfers; my arm was grazed by Fred Couple’s ball (playing with Tiger Woods) as it flew out bounds off the 1st tee; we stood directly behind Tiger chipping onto the 17th green from the rough; near Bubba Watson as he putted on the 9th green; watched Phil Mickelson practice chipping; chatted casually with Gary Player’s caddy of 25 years (Bobby) on the first tee; and when Brandt Snedeker paused on the fairway in front of us, I resisted telling him that his brother Haymes was in one of my Ole Miss classes and that Stephen graduated from Vanderbilt as he had.

On the 11th fairway, my hero Steve Stricker walked past a few feet away. Observing no rule about saying something to the players, I said, “Steve!” As he looked my way, I pointed to myself and Stephen, and said: “Steve Stricker, Steve Stricker.” He cracked a huge smile that Stephen caught on film and it made my day. Later on the 14th tee, I fought the urge to say more to Stricker as he stood inches away, but didn’t want to bother him or have my pass jerked. Incredible!

After multiple lead changes on Sunday, Adam Scott bested Angel Cabrera in a two-hole playoff by one stroke in a pouring rain on the 10th green becoming the first Australian ever to win the Masters.

Attending the Masters was somewhat overwhelming, but spending quality time with my son Stephen for three days was even more wonderful — we will go back!