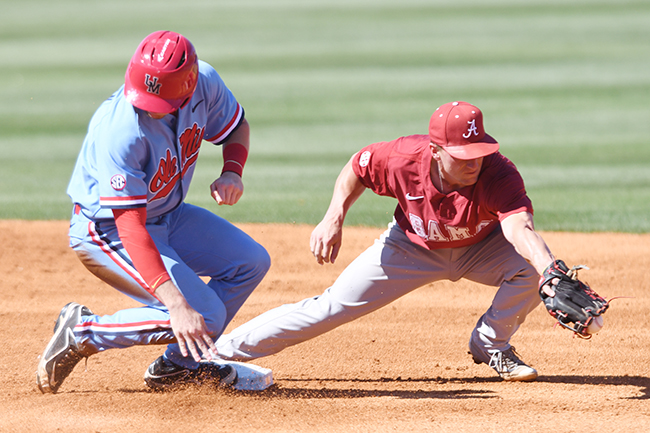 Ole Miss answered one sweep with another Sunday.

The Rebels scored six runs over their final two at-bats to put away Alabama, finishing off the sweep with an 8-2 win at Swayze Field. After Mississippi State swept the Rebels a week earlier, Ole Miss capped a 4-0 week with their fourth weekend sweep of the season and first in Southeastern Conference play since taking all three from Kentucky last May.

“They’re all important. All 30 (SEC games),” Ole Miss coach Mike Bianco said. “I know that sounds like coachspeak, but it’s the truth. But it was a huge win. There’s a big difference in going 3-0 and 2-1.”

Tate Blackman went 3-for-4 with two RBIs while Will Golsan had three RBIs, all of them coming in the final three innings. Golsan extended a 2-1 lead for Ole Miss (20-12, 6-6 SEC) in the seventh with a two-run homer and followed Blackman’s two-run single in the ninth with an RBI double to the wall in left off Mike Oczypok, one of four relievers used by Alabama (13-19, 2-10) after the Rebels chased starter Sam Finnerty (1-3) after three innings.

“Just trying to compete up there,” Golsan said. “We worked all week on just staying short to the ball and worked on getting people in from third. That’s what we’ve been doing this week.”

Ole Miss’ bullpen logged the final 3 1/3 innings with closer Dallas Woolfolk thwarting the Tide’s final real threat in the eighth. Logan Carey’s RBI double cut the Rebels’ lead to 5-2 before Woolfolk plunked Tanner DeVinny to load the bases with one out, but Woolfolk, who was already warming up to come into a one-run game before the offense put up its three-spot in the seventh, wiggled out of further trouble by getting a lineout and a strikeout to end the inning.

“But once it got close, you can tell Dallas never panicked. That’s why he’s so good.”

Designated hitter Tim Rowe had a pair of doubles, his first one plating Golsan to give the Rebels a 2-0 lead in the first, while Ryan Olenek added two RBIs for Ole Miss, which finished with 10 hits. The Rebels have scored at least five runs in each of their last four games.

Freshman Ryan Rolison (4-1) got his second straight weekend start and worked around some early command issues to get into the sixth despite throwing 100 pitches. The left-hander scattered five hits, walked two and matched a career-high with seven strikeouts for the win.

Alabama started the third with three straight hits against Rolison with Hunter Alexander’s RBI single putting two on with one out, but Rolison induced a groundout and a flyout to get out of it. He retired eight of the final 10 batters he faced, ending his day by punching out Carey for the second out in the sixth.

“Coach B always preaches you’re not going to have your best stuff all the time, and he really needs our starters to get late in the game so it lays off the bullpen a little bit,” Rolison said. “That’s what I did. I just kept hanging in there and tried to locate my offspeed early in the counts.”

Ethridge allowed just one hit and fanned three in 1 1/3 innings before the Rebels’ offense broke out for Woolfolk late.

“We’ve pitched consistently well, we’ve played consistent defense, and all we need is a little bit of offense,” Bianco said. “We know that will happen. We’ve just got to hang in there.”