“If it’s a boy,” Bill Strong announced to a crowded courtroom in Louisville, Mississippi, “I’ll send up black smoke; if it’s a girl, I’ll send up white.”

A few hours later, white smoke was billowing from the Strong’s chimney. This smoke — determined by gender — would come to define Mary Ann Strong Connell’s life in ways she never could have expected.

When Connell was eight, fire took the life of her younger brother. She blamed herself for the accident, and guilt became a motivator for the remainder of her remarkable life.

In “An Unforeseen Life” readers will walk with Connell through a different kind of firestorm as she becomes one of the first women practicing law in Oxford. The scenes continue to unfold when she convinces the Grand Wizard of the Ku Klux Klan to move his march off of the Ole Miss campus.

Her readers will share in her pain as she is called as an adverse witness in the wrongful termination trial of football coach Billy Brewer, who had once been her classmate at Ole Miss, and the exhaustion and difficulty of two NCAA investigations.

There are lighter moments when Connell warns a first-year law student named John Grisham “if you don’t get serious, you’ll never succeed at the practice of law,” in addition to a battle with Oxford’s colorful mayor John Leslie (who took to calling her “The Sewer Queen”) and a client who pays her with a sack of coons.

We witness the character growth of those around her, including her husband, whose conservative beliefs about women began to erode as he saw her succeed. We applaud her when she enrolls in law school with four young children and when she attends Harvard Law School for an advanced degree (alongside fellow classmate Barack Obama).

“An Unforeseen Life” is a powerful memoir about a woman who embraced what she could and tried to make the most of her life, despite an underlying sadness. Her story is a funny, touching account of a life “most richly blessed” if sometimes in unexpected ways. 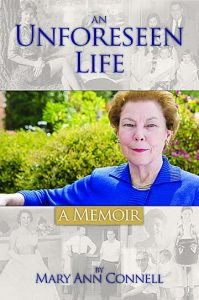 In 2015, author Mary Ann Strong Connell was inducted into the Ole Miss Alumni Hall of Fame. She will read and sign copies of “An Unforeseen Life” on Tuesday, at Off Square Books located at 129 Courthouse Square.