‘Believing in everything and knowing nothing at all’ 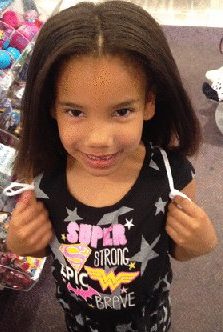 My almost 7-year-old granddaughter, Arianna, loves watching singing and dancing videos on YouTube. I made her a channel, with parental control filters of course, and she could spend hours watching them, teaching herself the popular dances and singing along with pop songs with young performers.

She found a video by a 7-year-old girl who sings a sweet, sad song, “Now They’re Up in Heaven,” dedicated to the children who died in the Sandy Hook massacre.

I cringed. I knew what was about to follow.

“What happened to those kids, Gramma?”

I somewhat chickened out and just replied that something bad happened to them one day and they died.

She seemed OK with that explanation, at least for now.

On Saturday we went to the Square to get our annual photo with the Easter Bunny.

“That’s not really the Easter Bunny,” she said matter-of-factually.

But she hopped on his lap and smiled anyway, and again, I chickened out and didn’t bring it back up.

Later that day, I was talking to a young woman who had very short hair and wore “boyish” clothing. Arianna, being unaware of what political correctness means, asked if she was a boy or a girl. The woman replied she was a girl but liked short hair. Arianna was very impressed by this. Most girls she knew looked like girls, she said.

We talked a bit on the way home about not caring what people looked like on the outside. That some boys had long hair and some girls liked short hair but people were people.

My granddaughters are mixed, their father is black and my daughter is white. So we have these conversations a lot lately as Arianna realizes that people can be different on the outside.

That night, she said she didn’t want to grow up. She wanted to stay a baby. I think all of the new knowledge this weekend was sinking in. Things aren’t always black and white as she once thought. There are mean people in the world. Children can die. Boys might not look like boys and girls might not look like girls. The Easter Bunny and Santa may not actually be real, or at least, in the way she once thought they were.

My heart ached for her. It’s never easy losing that childhood innocence.

When I found out I was adopted a few years ago, I heard a song from Evanescence called “Field of Innocence” and the lyrics explained my feelings perfectly:

I still remember the world

From the eyes of a child

Were clouded by what I know now

Where has my heart gone

An uneven trade for the real world

Oh, I want to go back to

Believing in everything and knowing

Most parents and grandparents wish their little, loved ones could remain in a wonderful world where nothing bad happens — where magic exists and unicorns are just as real as their pet dog. But we all know that can’t happen and I was watching it happen to Arianna and there is little I can do to stop it.

However, she’s young enough still that these thoughts don’t plague her for long and within a few moments, she’s off bouncing around doing cartwheels and pretending to star in her own YouTube show.

Now, more bad things are happening in the world and I watch the news with dread. I’m not an expert in foreign affairs but words like bombs, chemical weapons and air strikes make my heart hurt and I worry about the future for Arianna, her sisters and my grandsons. How long will it take for Arianna to hear about what’s going on and for the questions to start? It’s so much harder to hide children from the news today.

So I chickened out again and added a few more words to the filters on her YouTube channel — the same words that make my heart hurt.

I love her enough to give her as much childhood innocence as I can, knowing I won’t be able to protect and shield her much longer.

We snuggled together in bed Saturday night and whispered under the covers having some girl talk about the cute boy in her class (Heaven help me) and about the mean girl in her class. She talked about her upcoming dance show at the church she’s been attending with her father’s family. I told her I’d come watch her.

“OK. There’s like two white people there so you won’t be the only one.”

She shook her head.

“No, you don’t have to stand. There are lots of chairs there.”

I laughed loudly. She’s going to be an amazing woman one day.

Alyssa Schnugg is Senior Writer at the Oxford Eagle. Email her at alyssa.schnugg@oxfordeagle.com.