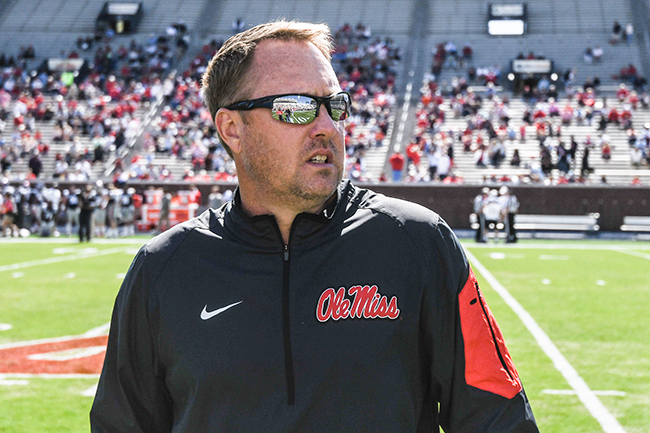 Like every other college football coach, Hugh Freeze knows there are still plenty of areas his team needs to improve on coming out of spring practice.

But the biggest concern for Ole Miss’ coach is a familiar one.

“The middle of our defense from the linebackers to the safety position,” Freeze said.

The Rebels’ defense is starting over under first-year coordinator Wesley McGriff after bottoming out last season under Dave Wommack, but much of Ole Miss’ personnel at those spots is the same. The linebackers’ collective lack of production drew heavy criticism last year after Ole Miss finished 120th nationally against the run with just one of them, rising senior DeMarquis Gates, finishing with more than 44 tackles.

“That was definitely a motivation,” said rising junior Detric Bing-Dukes, who made three starts and finished with 41 tackles in his first season with the Rebels after transferring from junior college. “We never looked at it or focused on that part. We focused on moving forward. We’ve got a new coaching staff and a new start.”

Gates has produced when healthy, leading the Rebels in tackles the last two seasons from his outside linebacker spot, but finding a man in the middle has been a chore. Bing-Dukes will likely get the first crack at securing that spot in the fall after being named the most improved defensive player by coaches this spring, a result of McGriff’s simplified scheme allowing Bing-Dukes to stay in the box and play to his run-stopping strengths.

But there isn’t a lot of experience behind them.

Rising senior Ray Ray Smith, who’s mainly been a reserve during his career, and walk-on Tayler Polk got many of the second-team reps in the Grove Bowl while sophomore Willie Hibler, redshirt freshman Donta Evans and junior college transfer Brenden Williams are other options. Signees Mohamed Sanogo, Josh Clarke and Zikerrion Baker will join the fold this summer.

“I think when you minimize guys’ jobs, you keep the menu small and you try to keep them in the same spots, they can become experts,” McGriff said. “I think you’ll see (Bing-Dukes) in the box a lot and you’ll see his confidence go up.”

Zedrick Woods is back as a junior after starting every game at free safety last season while rising senior C.J. Hampton ran alongside him as the starting strong safety this spring with Myles Hartsfield moving to corner, but it’s consistency that coaches are looking for from those positions. Hampton whiffed on a tackle near the line of scrimmage that led to the offense’s first touchdown in the Grove Bowl while Hartsfield couldn’t bring down A.J. Brown on a short pass that turned into a 76-yard score a couple of possessions later.

McGriff said Hartsfield’s versatility could allow him to move inside at times to the Star position, a nickel corner that was known as the Huskie in Wommack’s defense. McGriff initially said he planned to install a 4-3 base defense, but the Rebels usually practiced with five defensive backs on the field this spring.

“Your safeties are your quarterbacks of your defense, and there’s nobody behind them,” McGriff said. “We have to minimize our mistakes. Our mistakes not only give up big plays, but it could be the game or it could be the season. … We have to be much better at the safety position in terms of keeping everything in front and making the sure we tackle when the ball breaks through the line of scrimmage.”

Freeze said he saw some improvements in a defense that McGriff is tailoring to best fit the Rebels’ strengths, but there’s a lot of work to do in the back seven ahead of next season.

“I know exactly what we’re planning to do with the defense, and I think it’s going to be beneficial to us,” Freeze said. “I love the energy that’s happening there, but we still have a ways to go. That’s probably about how I felt about it last year.”