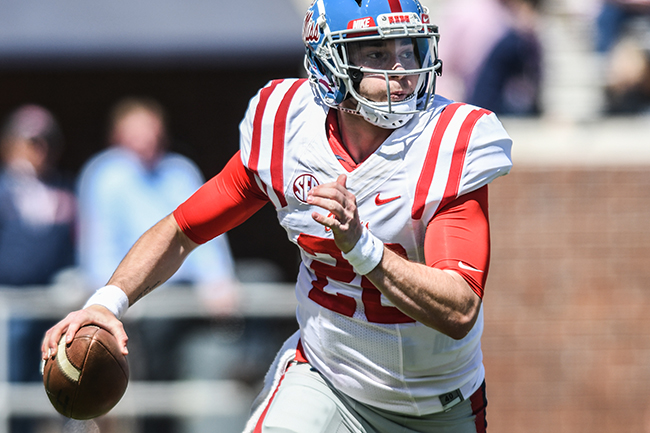 Phil Longo likened Ole Miss’ players trying to learn their new offense after a few spring practices to chickens running around with their heads cut off.

Longo is glad the Rebels’ first game is still more than four months away, but Ole Miss’ first-year offensive coordinator said things were far less chaotic by the time the Rebels culminated their spring with the Grove Bowl over the weekend.

“The progress that we wanted to make in the spring offensively, we have,” Longo said.

Quarterback Shea Patterson and his teammates are settling into Longo’s Air Raid system after a whirlwind beginning. Longo used the first four spring practices to install the offense and the next four to rehash all of it while adding a wrinkle here and a formation there. Short-yardage and goal-line packages were eventually put in while moving at a pace that some players have said is faster than anything they’ve experienced at Ole Miss.

Patterson said he got to the point late in the spring where he was reacting quicker to what was being called as opposed the first few weeks of practice when there were times he had to double check with Longo to make sure he was understanding terminology or a certain concept. He was in sync with his receivers throughout the Grove Bowl, completing 21 of 30 passes for 341 yards and two scores with no interceptions.

“I’m very comfortable,” Patterson said. “Right when Coach Longo got here, I believed in his system because of the success that he had. We’ve all kind of bought in. I’m 100 percent confident in him and his system.”

Longo said the only time the Rebels took a step back in their retention of the offense was after taking a week off for spring break, but “then we kind of got over that hump and got back into the groove.” With the rest of the spring and summer to brush up on the finer details, Longo expects his players to be thinking and moving even faster by the time fall camp rolls around.

“We get to slow it down, and we get to teach a lot of the finer points in our meetings,” Longo said. “They get to meet with each other and do their own thing. I’m sure they’re going to be out there throwing, and all those things will pay dividends in August because we’ll be kind of past the football 101 stuff in the fall.”

Longo added that the Rebels “don’t have a choice” but to add balance with a running game that’s largely struggled during Freeze’s tenure. Longo’s offenses at Sam Houston State finished in the top 40 nationally in the Football Championship Subdivision in rushing each of the previous three seasons.

He said he’s got confidence in the staff and the personnel to make that happen in an offense that everybody is starting to grasp.

“The offense was just really, really anxious to learn the new system,” Patterson said. “So far, I feel like the offense is flowing pretty well.”