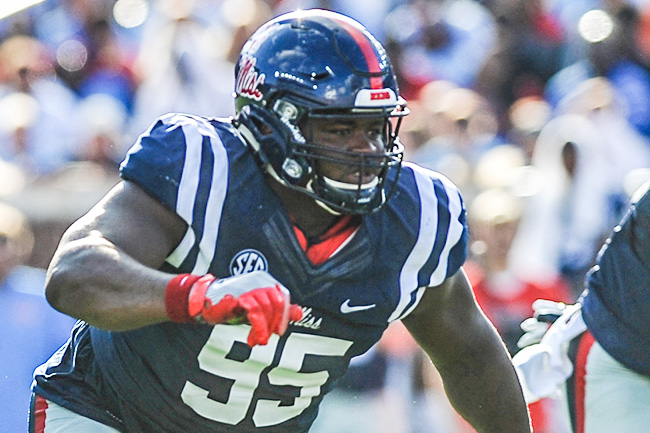 One of the jewels of Ole Miss’ star-studded 2016 recruiting class, Jones skipped his final semester of high school at Wayne County High to enroll early and used the head start to become a significant part of the Rebels’ defensive line rotation as a true freshman.

Jones played in all 12 games last season and started four, finishing with 39 tackles from his defensive tackle spot. He graded his performance as a C+.

This spring gave Jones the chance to start improving on that as he transitions into being a full-time starter.

“I’ve just got to be consistent,” Jones said. “Every down, no matter if it’s first, second or third, just being consistent and just keep fighting and trying to make a play.”

Jones usually went up against bigger offensive linemen, but he often flashed his playmaking ability using the kind of quickness that’s rare for a 6-foot-1, 313-pounder. The former five-star recruit unseated Breeland Speaks as the starter late in the season and finished fourth on the team with 4.5 tackles for loss while also notching half a sack.

Jones and the rest of the linemen started to learn a different technique this spring from new defensive line coach Freddie Roach, who puts an emphasis on hand placement and usage. Jones said Roach often shows the linemen video of NFL players to try to pass on pointers with another undersized yet quick player appealing to Jones the most — St. Louis Rams tackle and former NFL Defensive Rookie of the Year Aaron Donald.

Jones ran with the first-team defense all spring and will head into the fall as a starter alongside Speaks with former nose tackle D.J. Jones off to the NFL. The pair will try to anchor a defense on the interior that spent a lot of games getting pushed around last season as the Rebels finished 120th out of 128 FBS teams against the run and 126th in red-zone defense.

“It was just being consistent with the playcalling, getting the plays and getting lined up,” Jones said. “Some of the time, we probably got a wrong signal or something, but we just kept fighting. Just trying to get better this year at stopping the run.”

Despite his youth, Jones has the third-most starts of those returning on a defensive line that also lost Fadol Brown, John Youngblood and Issac Gross from the rotation. It has him working on another part of his game heading into next season.

“Marquis (Haynes) does a good job and I don’t want to knock his ability of being a leader, but I would say I’d like to be a leader of the defensive line.”