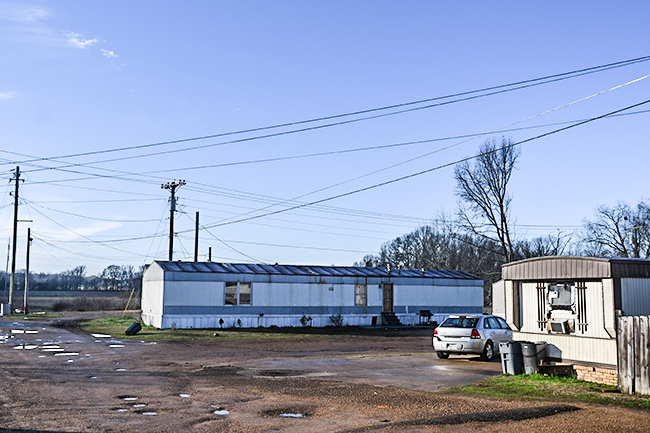 Bruce Newman A mobile home park in Water Valley has caused a stir in the community since a group of Oxford developers purchased it and plan to expand the complex on an additional 20 acres near downtown.

Yalobusha County supervisors voted 4-1 to hire Orion Planning+Design as the first step in the potential implementation of land use regulations and zoning in the county. The vote came in the  “first Monday” supervisor meeting in Water Valley on April 3 with District 5 Supervisor Gaylon Gray casting the sole nay vote.

City planner Bob Barber, who works for Orion, visited the board last month to pitch his company’s services. His visit followed earlier discussion on the topic, starting back in January when the news broke that four Oxford men had purchased an existing mobile home park on Gore Circle in Water Valley. The men also purchased adjoining property in the county and confirmed long-term plans to expand the trailer park in the county where, outside of flood plain regulations, there are no county regulations for property development.

In subsequent supervisor meetings other problems have triggered discussion about implementing land use ordinances, including complaints about blight and abandoned property.

Board President Cayce Washington clarified Monday that county supervisors are not against mobile homes.

Washington cited a recent fire when a mobile home on County Road 232 near Oakland was gutted as example of the need to implement some type of minimal standards in the county.

“There was raw sewage running out on the ground, it was hooked to a 50 amp service meter,” Washington explained about the property.

His comment triggered a boarder discussion about unsanitary conditions at some residences due to the lack of proper wastewater treatment systems.  Another example cited during the discussion was requiring underpinning for mobile homes.

“State law is going to preempt you on a lot of that,” Board Attorney John Crow noted.

“But do we have a way to enforce it?” Washington asked.

“You cannot have a residence without sewage disposal… If they have raw sewage that is going out on the ground, then MDEQ can stop that. I will be glad to send the letter out to report it,” Crow said.

“If it does get reported, that is true. But there are so many that don’t get reported. So much property will change hands and it doesn’t have a sewage system,” District 3 Supervisor Lee McMinn noted.

“I would like to see us commit to hiring Mr. Barber and his company. Once we get them hired then we can have some planning sessions and see how extensive we want to go. Do we want to try to put in building code issues, are we just going to stick to zoning or we may not want to do zoning? There are lots of options, we could get him hired and start the process to see what we are going to do,” McMinn recommended.

“I don’t think there is a person at this table who cares about telling people how to live on their own property, but at the same time we have to have some kind of rules out there. Otherwise it becomes a boondoggle,” Washington added.

Again citing the mobile home on County Road 232 as an example, District 4 Supervisor Timothy Booker explained the owner had bypassed the health department and had raw sewage running straight out of the residence.  Booker, who also works as a contractor, added that his first step on a job is to visit city hall and learn about the permits and rules governing the entity.

“We have a lawless county, it should be that you have to go to the courthouse and ask (about permits),” Booker explained.

“Until you get some cooperation with your electric servicers and water associations where somebody has to sign off to say they have had an inspection and a sewage system is there, this is going to happen,” McMinn added.

“The main thing is that we don’t want anybody to think we are against trailers. I know people who have trailers that are neater than houses,” Booker reiterated.

“I think we owe it to the 95-plus percent of folks who live in this county to make sure that their property values are held as high as they can by making sure that people who don’t have pride in their property are not just allowed to do anything they want to. Our assessed value in our county is tied to growth. When we have places that are deteriorating because of one or two bad properties in them, property values go down. This is just something we have to do,” McMinn said.

Last month Barber explained that public input is required as part of the implementation of a comprehensive long-range plan, which is required before land use restrictions could be implemented.

The $32,000 price tag for hiring Orion was also discussed, with Washington recommending tapping the county’s industrial operation fund. Currently, the fund has almost a half-million dollars, money generated from selling water from the county’s water system to Ajinomoto Windsor Foods.

Following the vote, McMinn also proposed issuing a moratorium on development in the county until the land use plan is completed. His suggestion was pulled following advice from Crow, who explained the county could seek an injunctive relief in Chancery Court if a proposed development surfaces before the county plan is adopted.

Jack Gurner’s photos from Memphis to be featured at…