Miscues doom Lafayette in key 2-4A loss to Ripley 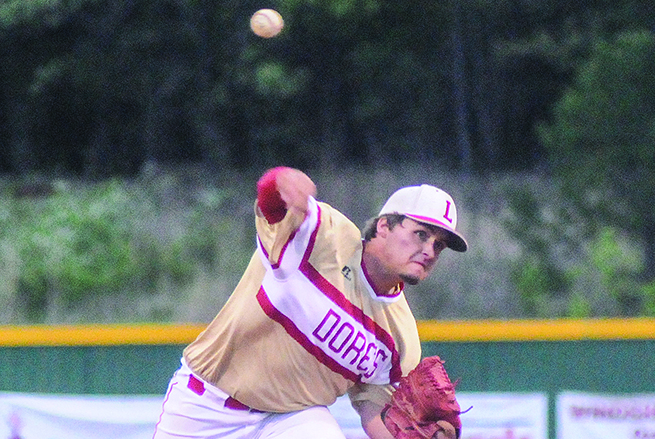 Lafayette pitcher Colin Crawford, above, throws a pitch during their game against Ripley at W.V. Brewer Field on Tuesday. The Commodores lost 8-3. (Jake Thompson)

What Lafayette had managed to avoid for most of the season reared its ugly head late in their game on Tuesday night. The Commodores committed four errors in a 9-3 loss to Region 2-4A lead Ripley at W.V. Brewer Field.

The loss dropped Lafayette to 6-3 in the region while the red hot Tigers improved to a perfect 9-0 and clinched the 1 seed for the 4A state playoffs later this month.
It was a lop-sided score in the end, but the game stayed close, with Lafayette (10-13-1) taking a lead, in the early stages.

The turning point of the game occurred with the score tied at 3-all and two outs in the top of the fifth inning. Lafayette right fielder Zach Meagrow dropped a fly ball that would have ended the frame. Instead, the two Ripley (19-1) base runners scored, giving the Tigers the lead for good.

“We haven’t been making (errors) much at home, but the fly ball again. It’s just amazing we can’t catch a fly ball,” Lafayette head coach Greg Lewis said. “It’s been happening to us all year in the outfield. We’ve just got to be able to make that play and get us off the field.”

After a quick 2-0 lead by Ripley in the second inning, Lafayette responded with a run in the home half of the second off a Tiger throwing error to cut the lead in half. They then took a 3-2 lead after scoring two runs in the bottom of the third. It was short-lived as Ripley knotted things up with a run in the fourth off a throwing error from catch Ross Ingram when he tried to reign back a throw to third but was unable to, sailing the ball into left field.

Once Ripley regained the lead, Tiger starter Jus Medlin, who pitched a complete game, recorded six of his 10 strikeouts in a row.

“I thought we had a good approach the first three innings. Then we let (Medlin) off the hook,” Lewis said. “I felt like we were going to be able to get them here at home. I told (the players), ‘Ya’ll had him just about down. Ya’ll were ready to make a knockout blow.’ They let him get back in it then they score a few more runs.”

Lafayette starter Colin Crawford had an efficient start to his outing, but faded in the later innings. Crawford pitched 4 2/3 innings, giving up five runs, two earned, on seven hits while walking three and striking out two. Hunter Coleman and Parker Brown worked the final 2 1/3 innings.

If Lafayette wants stay at home the first round of the playoffs, they will now have to leave Ripley with a win on Thursday night. A win gives them the 2 seed while a loss will make them the 3 seed and send them on the road to start the postseason.