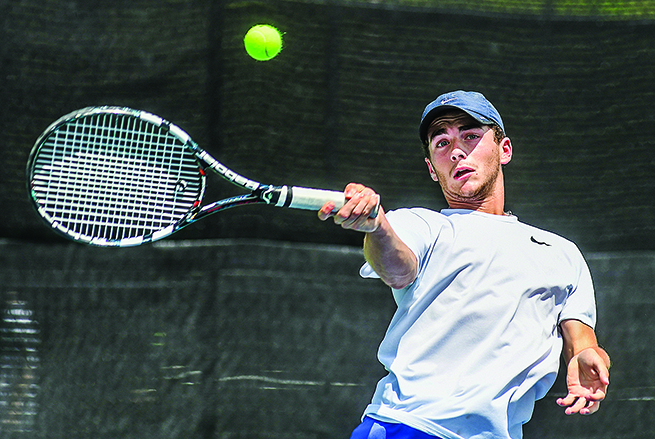 The bid for a 10th consecutive state championship in tennis begins next week for Oxford, but that did not stop them from showing how dominant they can be on an individual level as the Chargers cruised through the Region 2-5A individual tournament on Wednesday at the OPC John Leslie Courts.

Oxford’s players won the girls singles, boys singles and mixed doubles brackets while having both teams in the girls and boys doubles make it to the finals. They did not play the final matches on Wednesday to decide seeding in the doubles brackets. All of them qualified for the state individual championships that will take place the first week in May at John Leslie Courts.

It was smooth sailing for Grace Anne Jones and Bo Nash in the girls and boys singles brackets, respectively. Jones won her semifinal round match against West Point’s representative in straight sets (6-0, 6-0). Jones then won the championship match against Saltillo’s Erin Ford with a 6-0, 6-0 score.

Nash won his bracket with two straight set victories as well, defeating West Point in the semis then New Hope’s John Davis East in the finals.

It was another pair of 6-0, 6-0 wins in the mixed doubles bracket for the team of Gordon Whitwell and Amanda Lowery, getting past West Point in the semis and besting Saltillo’s team of Steven Gordon and Savannah Alley in the championship.

“You’re either winning or going home today, so that added a little bit to it,” Nash said of his team’s performance. “I think most of them knew deep down they could win maybe not at their best, but they didn’t play sloppy. I thought we played well.”

In the girls doubles bracket, the teams of Anne Hardy-Claire Stevens and Olivia Williams-Hailey Lowery all had 6-0, 6-0 victories in the quarterfinals and semifinals to set up a match in the finals against each other that Nash will determine seeding in at a later date.

It was the same for the boys side of the doubles bracket with the teams of Max Maundy-Ryan Mounce and Chris Le-Eli Able reaching the finals. Le and Able were the only Oxford players to allow their opponents to score a point with a 6-1, 6-1 win over West Point in the quarterfinals. They did shut out Saltillo’s team of Zac Turba and Ty Washington in the semifinals.

As for the team portion of the MHSAA Class 5A playoffs, Oxford will host Center Hill on Tuesday in the first round.

Ole Miss’ Greg Little slims down, catches up to…