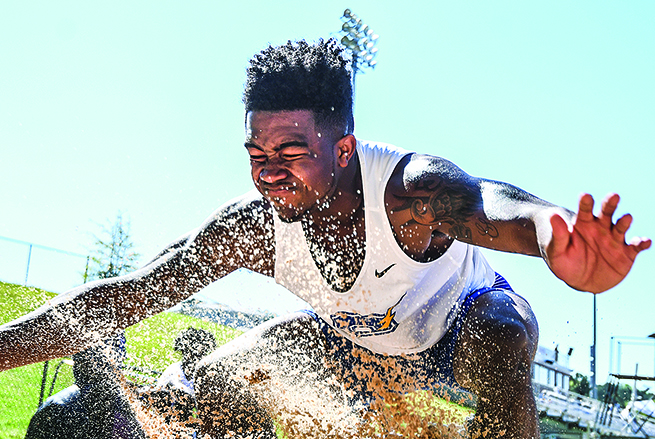 Oxford High's Devin Rockette does the long jump during a track meet at Bobby Holcomb Field, in Oxford, Miss. on Wednesday, April 12, 2017.

The march to Pearl has begun. Oxford’s journey to defend their MHSAA Class 5A championships started Wednesday with the Division 2-5A meet held at Bobby Holcomb Field. The event was backed up a day after postponing it on Tuesday with threat of rain in the area.

The change of schedule did not disrupt the Chargers’ performance on the track as well as the field events with both the boys and girls sweeping the region titles. The boys won with 162 points, 119 points more than second-place Saltillo recorded (43). Grenada (29), West Point (24) and New Hope (7) rounded out the team standings. The girls won with 157 points, 122 points more than second-place Grenada (35). Saltillo (35), New Hope (20) and West Point (17) finished up the girls standings.

The top four in each event qualified to move on to the next round, which will be the regional meet on April 22 at Oxford.

It was not much a challenge for Oxford’s boys in the track events, placing first in 11 of them. Jared Redding got things started with first place in the 110-meter hurdles and the 300-meter hurdles with Jaquan Webb taking first in the 100- and 200-meter dashes. Keaton Calhoon took gold in the 400-meter dash. It was a clean sweep for Oxford in the distance races with John Owen Yoste winning the 1600- and 3200-meter runs while Kyle Rock won the 800-meter run. Rock also placed second in the 1600 meters.

“I’m very happy with what we did today,” Oxford boys coach Chris Bush said. “A lot of people stepped up and did what they were supposed to do. In a couple events, we had a couple people slipped through and looking down the lineup those are definitely points we’re going to want for North Half when Canton and some other competition shows up. But overall we did what we were supposed to.”

In the field events, Oxford won all six events. D.Q. Thomas claimed the discus throw with a toss of 137 feet, 3 inches. Thomas also won the triple jump. In the shot put, Quentin Wilfawn won with an attempt of 46-4. Devin Rockette won the long jump with a leap of 22-6. With only two competitors in the pole vault, both qualified and Jackson Dear defeated Saltillo’s Rob Bradley with a vault of 10-0. Cameron Bailey won the high jump with an attempt of 5-10.

For girls coach Chris Patton, it is all about bulk. He wanted as many girls as he could manage to qualify on to the next round of the postseason and for the most part it was mission accomplished with Oxford winning 10 events on the track.

“I preach that to them,” Patton said of working for points. “It’s like that every year. Whoever gets the most points in the state meet has the best chance of winning. Even if you get third place for everybody, those points add up. So week after week, the main goal is to qualify and fight for those four spots.”

In the field events, the girls won all six events same as the boys team. Zharia Metcalf won the discus throw while Monya Baskins claimed the shot put, besting the field by five feet. Kyla Johnson won the triple jump while also winning the long jump. Charlie Kendricks only had one other competitor in the girls pole vault, beating teammate Elizabeth Duperier by six inches with a vault of 9-6. Kathleen Patton won the high jump by nearly a foot better than teammate and eighth-grader Mia McKey. Johnson placed third in the high jump.