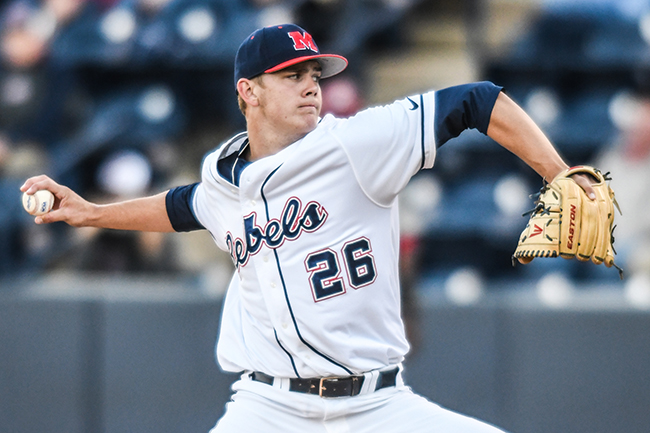 LSU started fast and never slowed down against Ole Miss on Thursday.

The eighth-ranked Tigers pounded out 15 hits against Ole Miss’ normally strong arms and put the game away with 10 combined runs in the middle innings, running away with a 15-2 win in the series opener at Alex Box Stadium. It’s the largest margin of defeat for the Rebels this season.

Ole Miss (21-13, 6-7 Southeastern Conference) finished with just five hits and was held scoreless until Cole Zabowski’s two-run double in the ninth. The Rebels had scored at least five runs in each of their previous five games.

But the dominance of right-hander Alex Lange and the Tigers’ offense proved to be an overwhelming combination for Ole Miss, which had its five-game winning streak snapped. Lange (4-4) retired the first 13 batters he faced, scattering three hits, walking one and striking out seven in seven innings.

Tim Rowe had two of Ole Miss’ hits. Will Golsan’s two-out double in the sixth was the only other one that went for extra bases.

Meanwhile, LSU’s bats poured it on against an Ole Miss team that began the series leading the SEC in earned run average and runs allowed. The Tigers (24-11, 8-5) scored in each of the first seven innings with most of their damage coming against sophomore right-hander James McArthur (2-2), who took the loss after allowing six runs (all earned) on nine hits while walking three in his second-shortest outing of the season.

McArthur, who yielded just seven earned runs in his first five starts, left with two on and two out in the fifth with Ole Miss trailing 4-0, but Andy Pagnozzi allowed both inherited runners to score and didn’t retire any of the four batters he faced as LSU built an 8-0 lead before the inning was over.

The Tigers used two hits, a pair of errors and two walks to put the game away with a six-spot in the sixth, four of which came on Greg Deichmann’s grand slam off Connor Green. Deichmann had three hits and five RBIs while Antoine Duplantis went 4-for-4 with four RBIs.

The teams will play again Friday at 7 p.m.