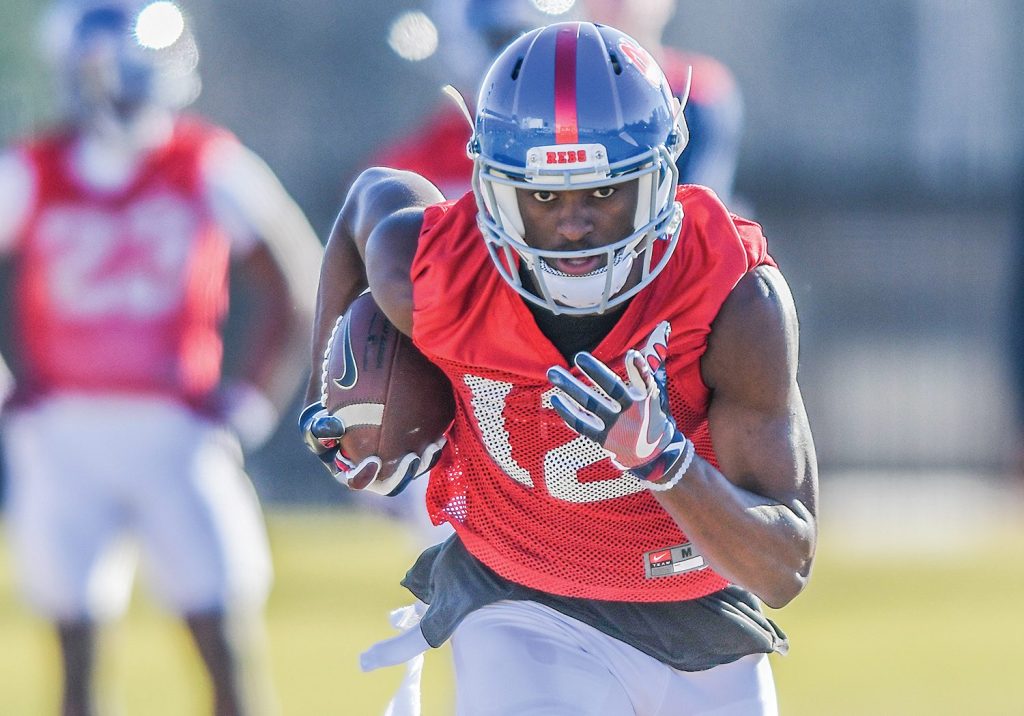 It’s weird for Van Jefferson to think of himself as a veteran among Ole Miss’ wide receivers.

Jefferson is preparing for his second season on the field for the Rebels after starting all 12 games last season as a redshirt freshman. The last two years have seen Laquon Treadwell, Cody Core, Damore’ea Stringfellow and Quincy Adeboyejo depart one of the Southeastern Conference’s most talented receiving corps.

Rising senior Markell Pack and junior DaMarkus Lodge are still around, but Jefferson has more starts than all the receivers on the roster combined. Barring injury or any other unforeseen circumstances, sophomores-to-be A.J. Brown and D.K. Metcalf will complement Jefferson as starters on the outside this fall.

“I don’t take it as that,” Jefferson said of being the veteran. “Other guys are in there and we’re all fun, but when it’s time to go to work, we go to work. Guys like A.J., D.K., DaMarkus Lodge and Markell Pack, they’re doing good this spring. It’s going to be a fun season.”

The son of longtime NFL assistant and Miami Dolphins receivers coach Shawn Jefferson, the younger Jefferson emerged last spring as the No. 1 option in the slot with an advanced knowledge of the game and precise route running before playing well beyond his years in the fall.

Jefferson caught 49 passes for 543 yards and three touchdowns, finishing third on the team in yards and touchdown catches. Only tight end Evan Engram had more receptions than Jefferson, who averaged 11.1 yards per catch while still getting acclimated to the college game.

“Last year was my first year playing and not knowing much, but now I’ve got more experience,” Jefferson said. “Finally playing SEC football after redshirting, now it’s just I’ve got to get the kinks of it, just settle down and know more and learn more.”

Jefferson and the rest of the receivers spent this spring learning a new offense under first-year coordinator Phil Longo, whose Air Raid system gives the wideouts more freedom to alter their routes based on the coverage. Putting the time in off the field has been just as important for Jefferson to learn all the intricacies of Longo’s offense.

“There’s little stuff you’ve got to figure out,” Jefferson said. “It’s an easy offense to pick up, but you’ve just got to study film every day, learn from Coach Longo and just stay in the film room.”

The receivers had a big day in last weekend’s Grove Bowl, combining to catch 21 passes for 497 yards with Brown and Metcalf each scoring touchdowns. But Jefferson was the favorite target for quarterbacks Shea Patterson and Jordan Ta’amu with a game-high six receptions for 126 yards, including a 74-yard touchdown.