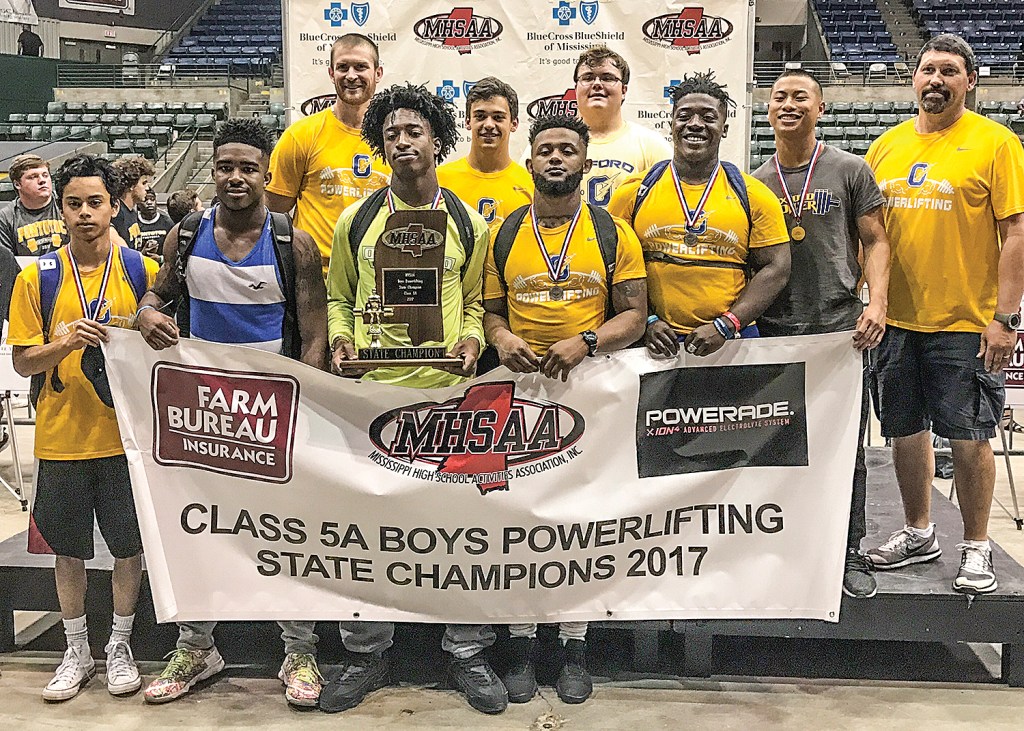 Members of the Oxford boys powerlifting team stand with the championship trophy and banner after winning their fifth straight MHSAA Class 5A championship Friday at the Mississippi Coliseum in Jackson. (Jake Thompson)

JACKSON — They were not at full strength, but that did not matter. Even down a man, the Oxford High boys powerlifting team earned their fifth consecutive MHSAA Class 5A title on Friday at the Mississippi Coliseum.

The Chargers used six top-3 finishes to pick up 34 points during the day, edging runner-up Lake Cormorant’s 31 points. Germantown (26), Gautier (23) and New Hope (19) rounded out the top 5. The five state titles put Oxford in a tie for fourth-most in MHSAA history with South Pike, and they have won them all after 2012.

“We had some setbacks and kids just had to do and pick up more than they’ve picked up before,” Oxford head coach Matt McCrory said. “They stepped up to the plate like I knew they would. These kids worked hard every day.”

Oxford started the afternoon session down one lifter after senior Nick Sisk was disqualified from competing in the 275-pound division. It left the Chargers with only four lifters in the afternoon instead of the five they were anticipating having.

The morning session got the Chargers off to a strong start with senior Alex Le winning the 148-pound division title with a total lift of 1,175 pounds, besting Pearl River Central’s Eddie Lizana by 15 pounds. Sophomore Luis Morales took second in the 114-pound division with a total lift of 760 pounds, missing first place by 40 pounds. Senior Devin Rockette rounded out the morning session with a second-place finish in the 181-pound division, lifting a total of 1,320 pounds and missing first place by only 35 pounds.

With Sisk out, Oxford managed to end the afternoon session with three podium finishes. D.Q. Thomas and Xay Herod took runner-up in the 198- and 242-pound divisions, respectively. Herod had a new Class 5A state squat record with an attempt of 655 pounds, but New Hope’s Brandon Bishop bested him with a squat of 685 pounds to claim the new record. Herod lifted a total of 1,630 pounds, falling 10 pounds short of Bishop’s first-place total. Thomas lifted a total of 1,405 pounds to claim second at 198.

DT Thompson was the final Charger to make the podium with a third-place finish in the 220-pound division. Thompson lifted a total of 1,370 pounds. Will Hollingsworth competed in the Super Heavyweight Division, finishing sixth with a total of 1,330 pounds lifted.

“Great kids and they deserve the credit,” McCrory said. “We only brought two competitors today who had been a part of winning the other four (titles). Those two seniors that we brought are kind of the core that makes the thing go.”

On the girls’ side of the competition, Oxford had two lifters place in the Class III competition. Senior Chiquita Sanders and junior Valerie Coleman took first and second place, respectively.

Sanders won the 132-pound division with a total lift of 730 pounds, besting the competition by 35 pounds. Coleman lifted a total of 730 pounds and edged Gulfport’s Nikera Johnson by 10 pounds for third place in the 148-pound division.