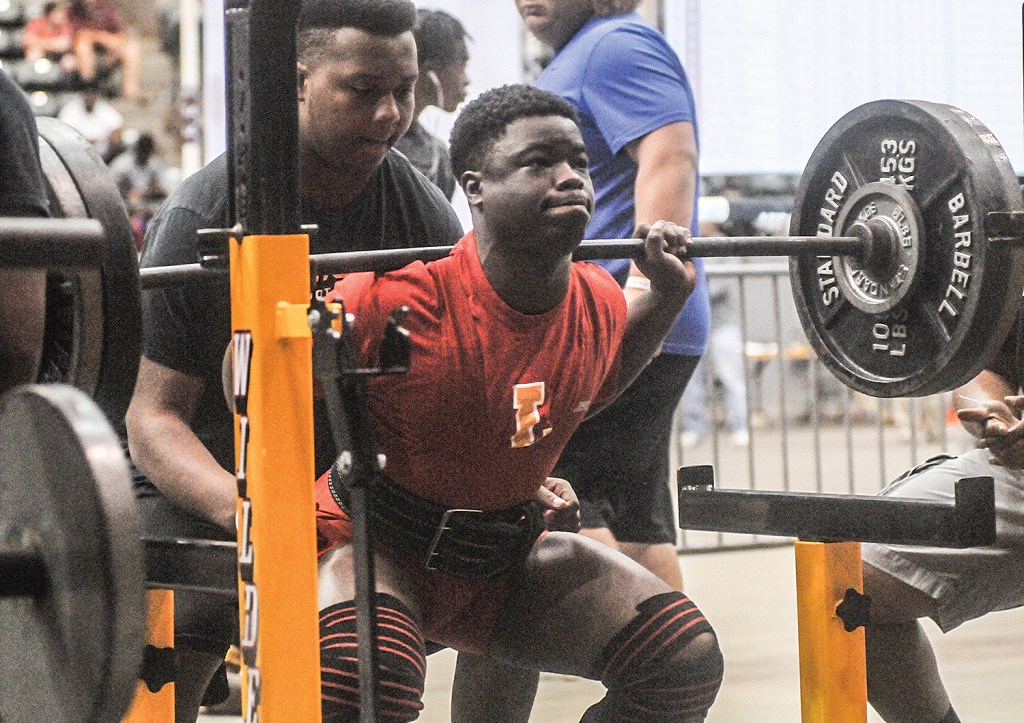 JACKSON — When the day began, Lafayette head coach Jason Russell was not sure if he had enough for his team to fight for a podium spot in the team standings. Turns out they did. The Commodores placed third in the MHSAA Class 4A powerlifting championships at the Mississippi Coliseum on Friday. Lafayette finished with 17 points, 34 points behind first-place Pontotoc and edging fourth-place East Central by one point.

“Coming in, we were starting in third place,” Russell said. “There were some things we would have liked to have done better, but we did some things really good today. The competition was very good. Lots of very strong lifters. … This is a building year. We won the region, got second in North Half and got third in the state. Just building on this every year and we’re going to be on that podium celebrating a team victory.”

Quarles lifted a total of 1,375 pounds in the 220-pound division to earn a silver medal. Quarles missed first by 120 pounds, which was won by Pontotoc’s Nick Romano, but he did do personal bests in the deadlift (550 pounds) and squat (525 pounds).

For Toles, it was a case of the wrong time, wrong place as he had to go up against Amory’s Cotavious Ivy. Ivy is considered to be the best super heavyweight out of all six classifications. Toles lifted a total of 1,580 pounds to finish second in the 308+-pound division. It would have been good enough on any other day, but Ivy lifted a total of 1,685 pounds, including a 740-pound squat attempt, to claim the state title.

In the Class II girls competition, Lafayette sent four lifters with two of them earning top-2 finishes. Makaliah Littlejohn and Madisyn Herron each took second place in their respective weight classes while Shamiah Mathis finished fourth in the 198-pound division and Jamayah Jones took seventh in the 220-pound division. All of Lafayette’s lifters had personal bests on Friday.

Littlejohn lifted a total of 840 pounds to finish runner-up in the 181-pound division. Herron lifted 1,000 pounds even to claim second in the super heavyweight division (220+ pounds). Herron had set a Class II state record with a squat of 470 pounds, but Velma Jackson’s Porsha Brown bested her on the very next attempt with 475 pounds to claim the new record.