Oxford tennis cruises in first round win over Center Hill 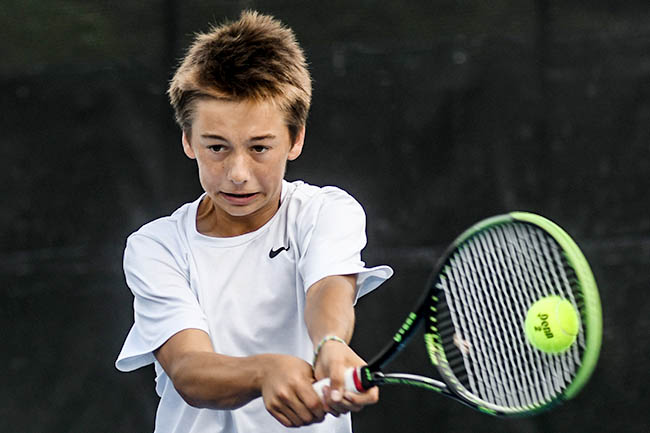 Oxford High's Gordon Whitwell plays against Center Hill in the opening round of the MHSAA Class 5A tennis playoffs, in Oxford, Miss. on Tuesday, April 18, 2017.

The drive for a 10th consecutive state championship was put in cruise control as Oxford defeated Center Hill 7-0 in the first round of MHSAA Class 5A state playoffs on Tuesday at OPC’s John Leslie Courts.

The Chargers will play the winner of Germantown and Vicksburg’s first round match in the second round next week.

The first round match took place is less than an hour as the Chargers dropped only five points combined in all seven games. In the singles matches Gordon Whitwell and Grace Anne Jones swept the boy’s and girl’s single matches, respectively.

Whitwell, who replaced Bo Nash in singles due to an illness, defeated Center Hill’s Donovan Sharp with a 6-0, 6-0 score. Jones faced minor adversity in her match against Mustangs’ Mikaila Coleman but took the point with a 6-2, 6-0 victory.

In the doubles portion of the match, Oxford’s teams of Amanda Lowery-Olivia Williams and Anne Hardy-Claire Stevens won in straight set victories. Lowery and Williams defeated Center Hill’s Hannah Ewing and Chloe Jenkins 6-0, 6-1 while Hardy and Stevens defeated the team of Rebecca Siera and Sophia Webb 6-0, 6-0.

It was more of the same on the boy’s side with the teams of Chris Le-Max Mauney and Eli Abel-Jimmy Green also had straight set victories. Le and Mauney defeated Chase Quentin and Micheal Floyd 6-0, 6-0 while Abel and Green won their match over Andrew Clifton J.D. Wilson 6-2, 6-0.

The mixed doubles point was not much of an issue either as Oxford’s Ryan Mounce and Hailey Lowery won with a 6-0, 6-0 score.