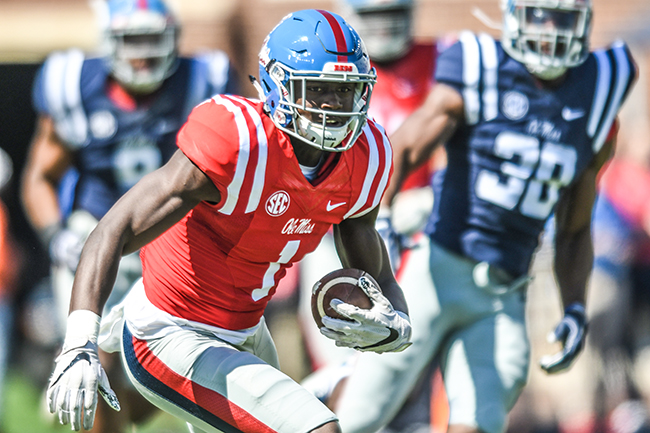 Ole Miss’ receiver was an immediate contributor last fall, starting his collegiate debut against Florida State and playing in all 12 games. He finished the season with 29 catches for 412 yards and two touchdowns.

He averaged 14.2 yards per reception while his catches and yardage were fourth-most among the wideouts, but Brown recently graded his freshman season as a C. As he transitions from a steady newcomer to one of the more proven playmakers for a young group of pass catchers that no longer has Damore’ea Stringfellow, Quincy Adeboyejo and tight end Evan Engram around, Brown expects to be better than average.

“I’m hard on myself, so I demand a lot out of myself,” Brown said. “I want to be the best. It’s either an A or nothing.”

They’re the same kind of expectations coaches have for the former Starkville High standout, who spurned hometown Mississippi State as wells as offers from Alabama, Cal and others to sign with Ole Miss in February 2016. He’s in line to be a full-time starter this fall after spending the spring repping with the first-team offense on the outside opposite D.K. Metcalf, another rising sophomore.

The pair of former four-star recruits proved to be a handful for the defense all spring and flashed their playmaking ability in the Grove Bowl by turning short receptions into long touchdowns. Brown turned in the longest score of the scrimmage, shaking off the tackle attempt of cornerback Myles Hartsfield on a slant before racing 76 yards for a touchdown.

It’s the kind of big-play potential Brown wants the Rebels’ new wave of receivers to turn into reality more consistently.

“I was always told potential doesn’t mean anything, but we’ve got a lot of talent in the (wide receiver) room,” Brown said. “We can make plays and run routes. We do just small things every day. This room is going to really take off this year.”

At 6-foot-1 and 225 pounds, Brown already has the physical makeup to create space against smaller defensive backs, but he said his focus this spring was to clean up his route running and cut down on drops as he got up to speed in first-year coordinator Phil Longo’s offense.

“The small things that help a receiver get open,” Brown said. “It’s hard to get open in this (Southeastern Conference), so it’s every play.”

“His speed has gotten tremendously better,” Metcalf said. “We’re watching film in there, and I’m looking at the top (receiver) like, ‘That can’t be A.J. running like that,’” Metcalf said with a smile. “That boy got fast.”

Brown played most of last season with a knee injury that required minor surgery once it was over. He said the knee was “no problem” for him during the spring, adding he’d forgotten he had the procedure done until he was asked about it.

“He’s really talented, and he’s healthy now,” Ole Miss coach Hugh Freeze said. “A lot of people really didn’t know he battled a knee injury last year, and we got that cleaned up as soon as the season was over. He had a really good spring.”

In Brown’s mind, there’s still a ways to go.

“I’m one of those guys that’s really not going to be happy until I reach my goals,” he said. “I’m OK right now.”