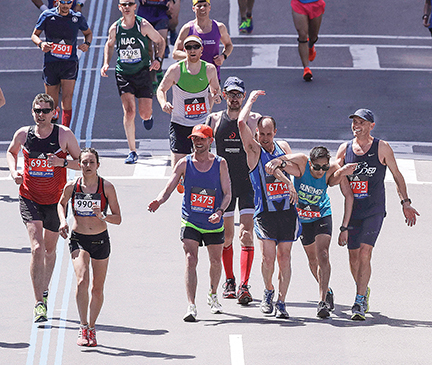 Bret Beauchamp is well known around Oxford as the “Running Santa Claus” as he dresses in a Santa suit and goes for a regular run during the Christmas season. But now he’s being recognized all over Mississippi and the United States after being captured by an Associated Press photographer assisting another runner near the finish line in Monday’s Boston Marathon.

Beauchamp, who was running in his ninth straight Boston Marathon, said he was about 200 yards away from the finish line when he noticed out of the corner of his eye a fellow runner stumble and fall. A runner nearby helped the man to his feet. Beauchamp stopped also and the two of them helped the runner get going again.

“I knew he was disoriented because he didn’t say anything,” Beauchamp said. “It was a hot day and I’m sure he got dehydrated. We may have even dragged him a little ways.”

In a marathon, runners must finish the race unassisted. Beauchamp said he told the man to wake up and “you have to walk the last couple of feet” as they neared the finish line.

“He took two or three steps across the line and the medics caught him and wheeled him off in a wheelchair,” Beauchamp said. “I’m pretty sure he’s doing fine now.”

Beauchamp, who has been running since he was 8 and doing triathlons and marathons since 1999, said he was determined to assist the runner to the finish.

“I’ve always heard the phrase ‘the pain you feel in the midst of the race is nothing like the pain you will feel if you don’t finish the race,’” Beauchamp said. “I’ve lived by that and I told myself ‘this guy is going to finish this race.’”

Beauchamp said he feels fortunate to have competed in the iconic race on Patriots Day.

“It’s one of the greatest sporting events in the world,” Beauchamp said. “It is the pinnacle of marathoning.”

“Boston is a sports-loving city and when you get there, it’s all about the marathon,” Beauchamp said. “It’s a party for the people of New England. A truly amazing sporting event.”

Beauchamp ran the race four years ago and had his best time, fortunately he was in an airport when his wife called to make sure he was all right following the bombing that killed three and injured several hundred others.

“I literally head straight to my hotel and take a shower and board a plane to get home,” Beauchamp said. “I was actually in a cab heading to the airport when the bombing took place. I wasn’t even aware of what happened.”

He said he’s never had reservations about returning for the marathon.

“The next year, I felt like everyone had to go back and let the world know this race can’t be stopped,” Beauchamp said.

He said security has become much more stringent.

“Seeing soldiers on top of buildings with guns is bizarre, but I guess that’s the state of the world we live in now,” Beauchamp said.

“Just a few years ago, there were like only 16 people from Mississippi who ran it and now to have three from Oxford is amazing,” Beauchamp said. “We’re a growing, running community. I train early in the morning and it’s pretty cool to see more and more people out running in Oxford.”

Bret and his wife Lindsay have been competing in triathlons and marathons for years and now their two girls, ages 8 and 12, have run a couple of 5ks.

“It’s not something we push on them, but that’s all they’ve seen us do and have grown up around it,” Beauchamp said. “My oldest says she wants to run cross-country next year. I told her I may not be able to help with math homework, but I can help you get ready to run.”

Beauchamp, who was seriously injured after falling off a roof last year, rehabbed his way back to health by resting in order to compete in this year’s Boston Marathon. He said the time off slowed his training for the race.

“I had to be cleared with CT scans to make sure there was no bleeding on the brain,” Beauchamp said. “I had to lay low for a month and just walk. I had my final CT scan on Jan. 31 when they gave me the go a head to train. But I feel very blessed to have run at all this year.”

He’s already looking forward to returning to Boston next year.

“There’s no money in it and you could never make a living doing it, but pushing harder to see how much faster you can go is the drive for runners,” Beauchamp said.