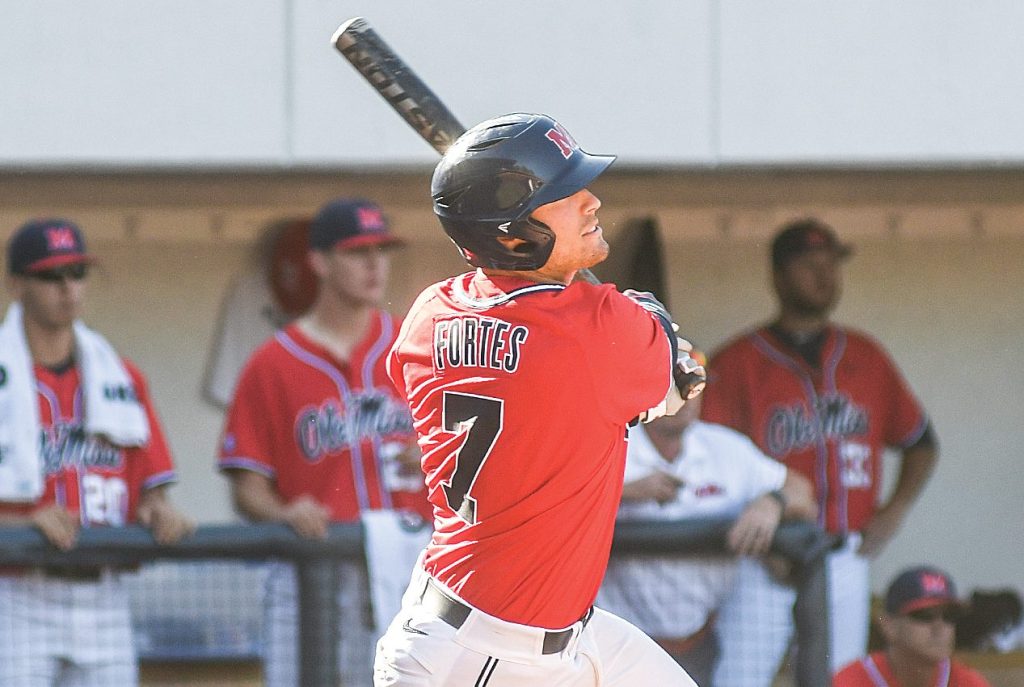 Once again, Nick Fortes knew he’d have to practice some patience.

Fortes played sparingly his freshman season at Ole Miss while backing up All-Southeastern Conference catcher Henri Lartigue, who went on to be a seventh-round draft pick of the Philadelphia Phillies. This year, it was heralded freshman Cooper Johnson, the highest-ranked recruit in the Rebels’ No. 1-ranked signing class, who immediately took over behind the plate.

“Throughout the fall, he played really well and I felt like he did deserve an opportunity,” Fortes said. “It didn’t surprise me at all.”

Two months later, it’s Fortes who’s getting his chance as an everyday player, one he’s showing he deserves just as much.

Known more for his offense than the defensive-minded Johnson, Fortes has already started more games this season than he played all of last season. He made his first weekend start March 25 at Kentucky and got the nod behind the plate in the final two games of the series against Mississippi State the following week with the transition to the college game being a slow one for Johnson, who’s batting a team-low .137 with just seven hits on the season.

“It just kind of happened,” Fortes said. “(Head coach Mike Bianco) just put me in there. I didn’t ask any questions. I just accepted it and did the best I could and let it all fall into place.”

Fortes has started 11 straight games, providing consistent offense for an Ole Miss team that’s struggled to produce much of it heading into its home series against Missouri (26-12, 7-8 SEC) starting Friday at 6:30 p.m. The Rebels (23-14, 7-8) are last in the SEC in most offensive categories, including average, runs, hits and RBIs, but Fortes leads Ole Miss with a .317 average and is hitting .375 since taking over full-time three weeks ago.

His bat’s been even hotter against some of the best pitchers the SEC has to offer, hitting at a whopping .429 clip in conference play with an attacking, steadfast approach.

“I just try to stay aggressive early in the count and avoid getting to two strikes as much as I can because that’s when you get the best pitches,” Fortes said. “Just try to look for one pitch and eliminate all the other pitches and do damage with the pitch that I do get that I’m looking for.

And while Fortes doesn’t possess the same rocket arm and advanced skills behind the plate that made Johnson an intriguing draft prospect coming out of high school, his defense has been more than serviceable. Fortes owns a .989 fielding percentage and has thrown out five of the 14 runners who have attempted to steal on him with an arm that’s livelier than it was.

“So much is required of (catchers) from bullpens to catching intrasquad games to the weight room, sometimes I think it’s a toll on the arm,” Bianco said. “I think last year he struggled a little bit with throwing. This year, that hasn’t been an issue. He’s been very accurate and has a strong arm. He’s always been able to catch and receive.

Fortes’ legs got a rest Wednesday as Johnson got the start in the Rebels’ 14-6 win over Arkansas Pine Bluff, but Bianco kept Fortes’ bat in the lineup by giving him his first career start at first base. Bianco said Fortes, who didn’t commit an error and had six putouts, played “terrific” at the new position considering he had practiced there just once earlier in the week.

Freshman Cole Zabowski and junior college transfer Chase Cockrell have logged most of the innings at first this season but are hitting a combined .246 with six errors between them. Regular third baseman Colby Bortles has even gotten a handful of starts across the diamond.

With Ole Miss looking for more production there, Bianco said Fortes and Johnson will be on the field at the same time more often.

“No doubt about it,” Bianco answered when asked if Fortes will get more starts at first. “He may even start tomorrow night. Haven’t decided that yet, but without a doubt.”

Fortes just wants to keep his opportunity going, wherever that may be.