Oxford softball edged by Grenada in 5A playoff opener 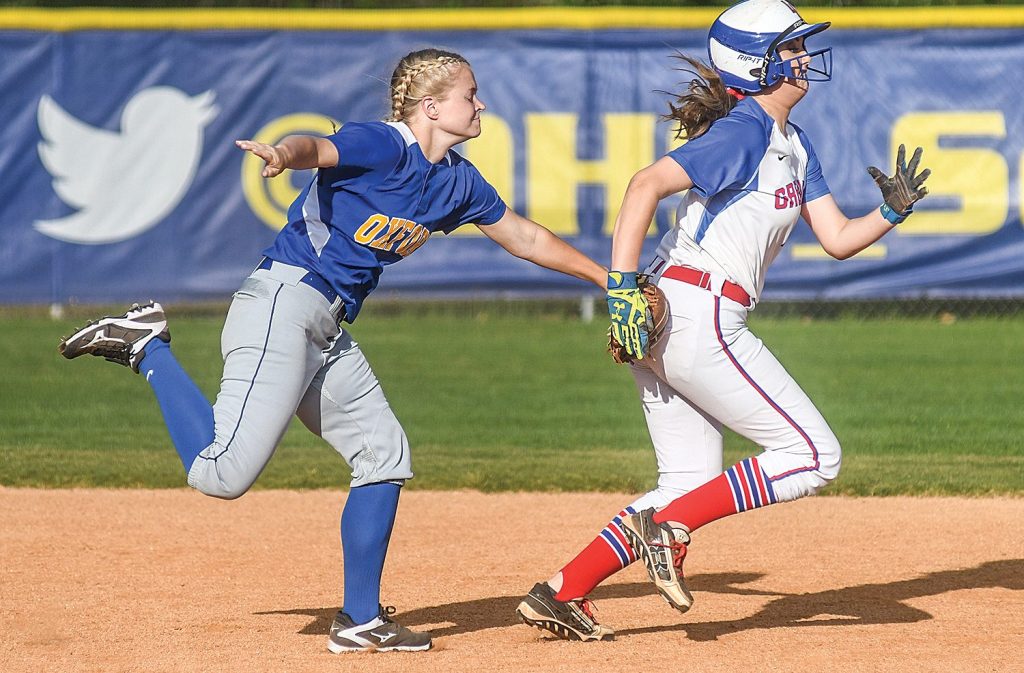 Oxford’s Brittni Beard (11) tags out Grenada’s Jenna Coker (4) in a rundown during an MHSAA Class 5A playoff game at the OHS softball field in Oxford, Miss. on Thursday, April 20, 2017. Grenada won 1-0. (Bruce Newman)

The offense was expected to be at a minimum when Oxford and Grenada met on Thursday night, but only one run may have even exceeded expectations.

The Chargers of Grenada took Game 1 of their MHSAA Class 5A first-round softball playoff series over Oxford, winning 1-0 at the Oxford High softball field on the Oxford Middle School campus.

The game was moved up from Friday due to threat of inclement weather. Oxford (16-9-1) will try to keep their season alive in Game 2 set for Saturday at Grenada, but weather could interfere again and cause the game to get bumped to Monday afternoon.

It was tough at the plate for Oxford Thursday night. Through the first four innings, Oxford had only one hit and two baserunners with only one of them getting past first base. Grenada pitcher Olivia Burns had Oxford confused all evening, striking them out 14 times and seven of them in a span of 12 at-bats in the first four innings.

“We had a game plan and we just didn’t stick to it,” Oxford head coach Tabitha Beard said. “I’m not going to take anything away (from Grenada). (Burns) is a good pitcher and we don’t see that a whole lot with the way that she moved the ball and keeping us off guard. But we didn’t do a good job of adjusting.”

Trailing by one, Oxford’s best chance to score came in the bottom of the fifth inning with the bases loaded with two outs. It went by the wayside when catcher Harley Thomas struck out.

Oxford’s two hits came from pitcher Brittni Beard in the first inning and another by right fielder Kelsey Wilborn in the fifth.

In the circle for Oxford, Beard had a solid outing in her complete-game effort. Beard gave up one run off six hits while striking out three and walking two.

Beard got Oxford out of two jams where Grenada (16-6) had chances to break the game open. In top of the second inning, Grenada loaded the bases but could only push the lone run across as Beard got out of trouble with help from her defense. The defense came through again in the fifth inning after Grenada loaded the bases once again but could not extend their lead. Oxford did not commit an error all game.

“(Brittni) did a good job, but it wasn’t her best either,” Beard said. “I can’t say enough about our defense. We’ve had games this year where we develop what I call quicksand and (errors) stockpile. They did a great job of making sure that didn’t happen.”