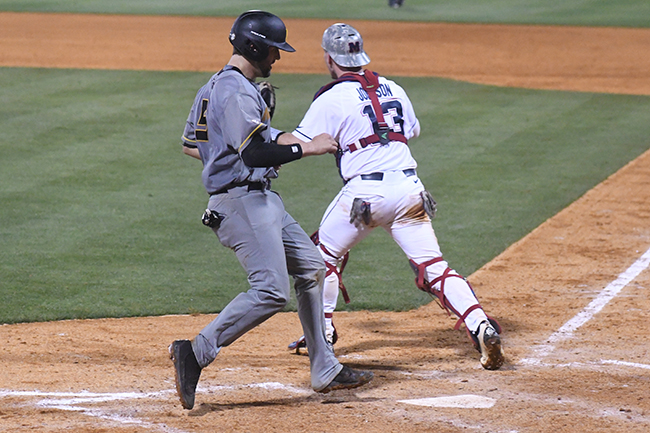 Ole Miss wasn’t facing a prototypical Friday night arm in the Southeastern Conference, but it was hard to tell.

Missouri’s Cole Bartlett stepped in for Tanner Houck and silenced the Rebels over the final eight innings, hurling a complete game in his first start of the season as the Tigers won 9-3 at Swayze Field in a wet series opener Friday. The middle game of the series is set for 4 p.m. Saturday.

The start of the game was delayed 40 minutes by rain, which resulted in Bartlett getting the start in place of Houck, the Tigers’ ace. Missouri (27-12, 8-8 SEC) posted on the team’s official Twitter account that Houck, who’s widely projected to be a first-round pick in this year’s MLB Draft, didn’t have enough time to warm up.

“That’s overrated,” Ole Miss coach Mike Bianco said of the sudden pitching change affecting his hitters. “We have a report on all their pitchers, so once they made the lineup change, we grabbed all the hitters in the dugout and gave them the information.

Bartlett (5-0), who had thrown 43 2/3 innings of relief with a 2.47 earned run average coming in, allowed singles to the first three hitters he faced with Colby Bortles’ RBI single giving Ole Miss (23-15, 7-9) a quick lead. Will Golsan scored as Ryan Olenek was thrown out trying to steal to make it 2-0.

But the Rebels couldn’t string much else together against Bartlett, who held Ole Miss scoreless over the next seven innings. Bartlett, whose previous career-long outing was six innings against Arkansas earlier this season, scattered 10 hits and struck out three.

“He just kept his fastball down,” said Golsan, who had three of Ole Miss’ hits. “He had some sink on it and kept us off balance with the changeup and the slider.”

Bortles went 2-for-4 while Olenek drove in a run, but all of the Rebels’ knocks were singles while Ole Miss had just three at-bats with runners in scoring position. Meanwhile, six of Missouri’s seven hits went for extra bases and produced all but one of the Tigers’ runs.

“It’s about the timely hit,” Bianco said. “They got all the big hits tonight. We had more hits than them, but you’ve got to get them with runners on.”

Brett Bond hit a tying two-run homer in the second off James McArthur before leadoff hitter Connor Brumfield put Missouri ahead for good with a solo shot to right, his first homer of the season, the next inning. McArthur (2-3) settled in after that to bounce back from his shortest outing of the season last week at LSU, retiring Missouri in order in each of the next three frames before turning things over to the bullpen after a leadoff walk in the seventh.

McArthur allowed just one other hit, walked one, struck out five and was charged with four earned runs but left with the Rebels trailing 3-2. Will Stokes walked the first batter he faced in the seventh before giving up an RBI double to Alex Samples.

A two-out error by Nick Fortes at first led to two unearned runs in the eighth before Missouri added on in the ninth against Connor Green, who allowed two more runs on two hits.

“Once again, (McArthur) comes off the field and the bullpen fails him and lets his runner score, so his line looks worse,” Bianco said. “He pitched well and deserved a lot better fate than that.”