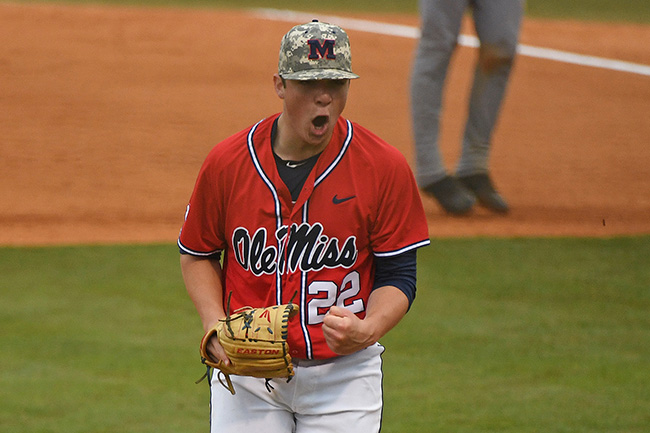 Ryan Rolison didn’t find out he was going to pitch a day earlier than usual until he got a message from Ole Miss assistant coach Carl Lafferty at 8:30 Saturday morning.

“I had a text from him saying (David) Parkinson is sick and you’re going to have to go,” Rolison said. “I just said, ‘I’m ready to go, Coach.'”

Rolison threw six shutout innings and racked up a career-high nine strikeouts, leading Ole Miss to a 3-1 win over Missouri on Saturday at Swayze Field that evened the series. The Rebels will go for their second series win in the last three weekends Sunday.

Rolison, the Rebels’ usual Sunday starter, was bumped up a day in the rotation with Parkinson dealing with the stomach bug and overcame some early control issues to eventually get in a groove. The freshman left-hander had five strikeouts and four walks through the first two innings yet combined with Will Ethridge, who threw two hitless innings of relief, to keep Missouri scoreless through eight frames.

“I was rushing with my body a little bit, and it kind of got in my head a little bit,” Rolison said. “I tried to overthrow a couple times and tried to underthrow a little bit. I just had to stop thinking, keep my weight back and drive some balls through the zone.”

The Tigers (27-13, 8-9 Southeastern Conference) made things interesting in the ninth against Dallas Woolfolk, who surrendered a leadoff homer to Trey Harris. Missouri got the go-ahead run to the plate, but Woolfolk struck out Brian Sharp before getting Alex Del Rio to pop out to notch his eighth save.

Missouri’s first hit came on Chris Cornelius’ one-out single in the fifth, but it’s the only knock the Tigers got against Rolison (5-2), who set a new career-high in strikeouts when he fanned Sharp to start the inning and retired 13 of 15 batters at one point. He threw 102 pitches, his last one resulting in his final punchout to end the top of the sixth after issuing his fifth and final walk the batter before.

Rolison was opposed by Missouri ace Tanner Houck, who was scratched from his start Friday after Missouri said he didn’t have time to warm up. Houck (3-6) had allowed two earned runs or fewer in five of his previous eights starts and limited Ole Miss (24-15, 8-9) to five hits while striking out seven and walking three in eight innings, but the Rebels took advantage of their free baserunners to scratch across all three runs against the junior right-hander.

“Ryan’s waking up in a dorm not expecting to pitch today, and I think sometimes for starters, when you break up their routine sometimes, it’s a little different,” Ole Miss coach Mike Bianco said. “Proud of the way he handled it. We needed all those zeros tonight.”

Houck walked one and hit two batters to load the bases for Ole Miss in the first before Tim Rowe’s RBI groundout gave the Rebels a 1-0 lead. He issued a two-out walk to Tate Blackman in the fifth before Will Golsan singled and Colby Bortles plated both with a single up the middle against a shallow infield — the Rebels’ only hit in nine at-bats with runners in scoring position — to give Rolison and the bullpen a three-run cushion that turned out to be necessary.

“What really made the inning was aggressive baserunning by Blackman,” Bianco said. “He gets to third base (on Golsan’s single), which allows Golsan to get to second base. With Colby hitting the ball up the middle, if Golsan doesn’t get to second, I don’t think the shortstop is playing where he’s playing. You have to be able to bunch those hits together and those at-bats together against him because he’s so, so good.”

Sunday’s first pitch is set for 1:30 p.m. Bianco said Parkinson did not come to field Saturday as a precaution but added he’s “hopeful” the junior left-hander will be able to take the mound in the series finale.

“The trainer went to his apartment and gave him medicine, but we feel pretty good he’ll be able to start tomorrow,” Bianco said.