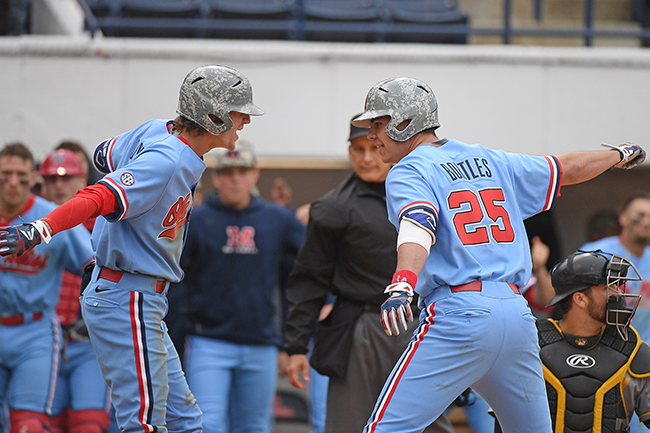 The Rebels put up the most runs they’ve scored in a Southeastern Conference game in a month before holding on for a 9-6 win over Missouri on a chilly afternoon at Swayze Field. The victory delivered an important series win for Ole Miss, which won the final two games after Friday’s 9-3 loss to get back to .500 in league play with trips to No. 14 Arkansas and No. 12 Florida looming the next two weekends.

Ole Miss (25-15, 9-9 SEC) will continue its daunting week Tuesday at Trustmark Park in Pearl with the Governor’s Cup against No. 15 Mississippi State, which swept the Rebels earlier this season.

“I think it was big not only to get our record back to even (in conference play), but it’s kind of a confidence booster for the team because I think we all needed it at this point,” said Nick Fortes, who made his fourth straight start at first base. “We’re at the point of the season where we’re past the halfway point and it’s kind of getting make or break, so it’s good to get a big series win and help us go forward.”

Will Golsan went 2-for-4 with an RBI to raise his average to .301 while Colby Bortles drove in all three of his runs with a homer, his sixth of the season. Fortes had a pair of doubles and three RBIs with his two-run double in the fourth giving the Rebels a 9-1 lead — the most runs Ole Miss has scored against a league opponent since pushing nine across against Kentucky on March 23.

David Parkinson labored in a start that came a day later than usual after dealing with a stomach virus Saturday, striking out five but allowing four runs on eight hits and walking three in just 4 2/3 innings. He needed 107 pitches to go that deep with the Tigers chasing the junior left-hander with three runs on four hits in the fifth.

“Really it looks like a bad line. He doesn’t get the win and gives up four in 4 2/3, but he was a pitch away from going five innings and only one run,” Ole Miss coach Mike Bianco said. “He’s a good competitor. He’ll never admit it, but I just don’t think he was right today health-wise.”

Houston Roth (2-0) worked three innings of two-run relief to get the win, though both runs against the freshman right-hander were unearned because of two errors in the eighth. A sacrifice fly from Chris Cornelius and an error helped the Tigers make it a three-run game, but fellow freshman Will Ethridge came on to get the final out in the eighth and retired Missouri in order in the ninth, running his streak of consecutive innings without having allowed an earned run to 11 2/3.

Missouri opted to start hard-throwing righty Bryce Montes De Oca instead of Michael Plassmeyer, who was bumped from his scheduled start Saturday with Tanner Houck getting the ball for the Tigers in the middle game. Montes (3-3) had issued 24 walks in 35 1/3 innings coming in and lived up to his wild billing, walking five in just 2 1/3 innings while leaving with the Tigers trailing 3-0 despite allowing just two singles and a double.

Plassmeyer threw strikes in relief of Montes, but the Rebels teed off to break things open with five runs on five hits off the left-hander in the fourth. Bortles delivered the big blow in the frame with the three-run shot into the Rebels’ bullpen to make it 7-1 before Fortes added on three batters later.

“I knew he wasn’t going to throw me two fastballs in a row, so he threw me a curveball up,” Bortles said. “I put a good swing on it, and luckily it got out today in this weather.”

Missouri outhit Ole Miss 12-9 with TJ Sikkema retiring all 10 Rebels he faced over the final 3 1/3 innings, but Roth and Ethridge combined to scatter just four hits in their 4 1/3 innings of work to thwart Missouri’s comeback attempt.

“(Roth) of course did a great job today, and Will looks to just continue to get more and more comfortable out of the ‘pen,” Bianco said. “He looked like a back-of-the-end bullpen guy today. That’s nice when you have a guy like him and Dallas (Woolfolk) at the back end.”