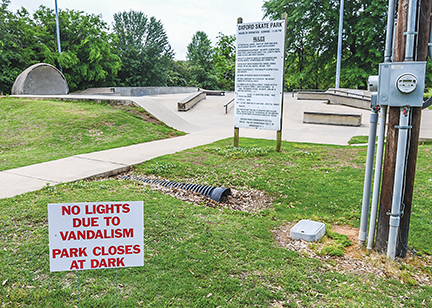 The Oxford Skatepark will no longer have lights on at night.

Due to excessive and repeated vandalism, the Oxford Park Commission has elected to close the popular skatepark at dusk daily.

According to the OPC, the electricity to power the lights at the park has been turned off until further notice.

Over the past few months, unknown individuals, according to OPC spokesman John Davis, have tampered with the box that stores the electrical equipment.

“Steps have been taken by the OPC, including its administration and maintenance crews, to prevent the damage, as well as protect residents from any injuries. Despite these measures, damage continued,” stated Davis in a press release Friday.

OPC decided their only option to stop the damage to electrical equipment was to turn the power off, essentially closing the park to skaters at sunset.

The park, located on Bramlett Boulevard, first opened in 2006 next to the Pavilion across from the Oxford-Lafayette Public Library.