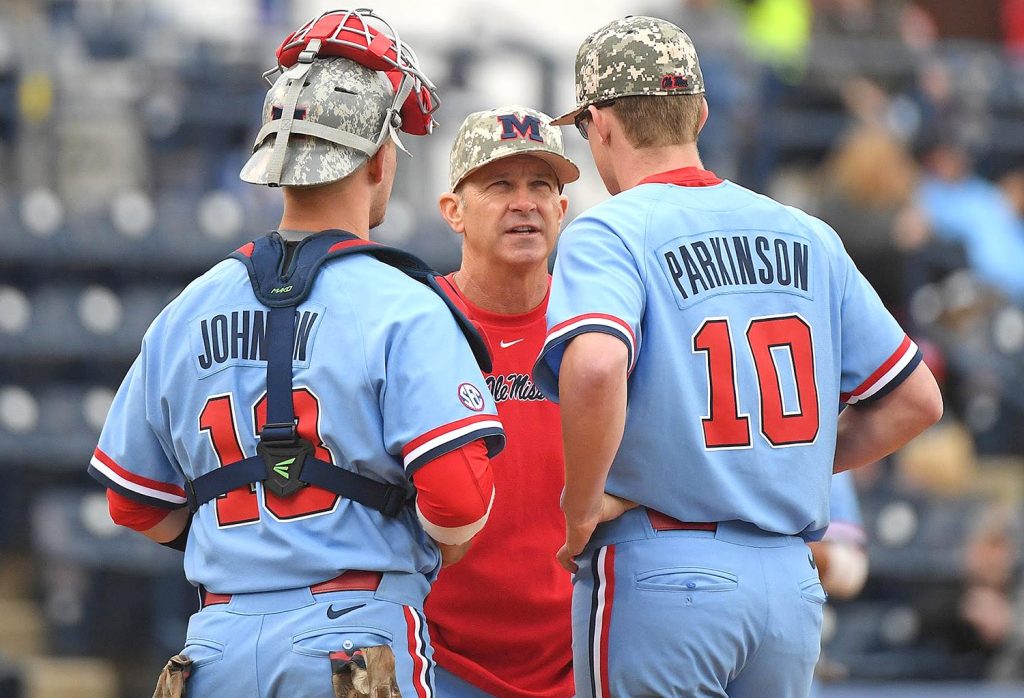 Regardless of the circumstances surrounding it, Ole Miss coach Mike Bianco has preached to his team all season the importance of using blinders, a cliché often thrown around to remind players to focus on the next game rather than what’s coming afterward.

“That’s what we’re about,” infielder Nick Fortes said. “That’s what Coach B always preaches, and we try not to look ahead because the next game is always the one that matters. That’s kind of how we’re looking at it.”

It’s useful during a 56-game regular season, but there are only so many chances in a season that’s growing shorter.

Ole Miss has just 16 games left before the Southeastern Conference Tournament to try to boost its postseason resume starting Tuesday at 6:30 p.m. in the Governor’s Cup against No. 10 Mississippi State, which swept the Rebels (25-15, 9-9 Southeastern Conference) in the teams’ series earlier this season. It starts a stretch where Ole Miss will play seven top-19 RPI opponents in nine games, all on the road.

Ole Miss will travel to Fayetteville on Wednesday for a series at No. 15 Arkansas starting Thursday. The Rebels will return to Swayze Field next Tuesday for a pair of midweek games against Louisiana-Monroe before heading to No. 9 Florida next weekend.

“The truth is there are only 16 games,” said Bianco, whose team is a combined 5-8 in road and neutral-site games. “It doesn’t really matter if they are home or away, you’ve got to win them. And you’ve got to win as many as you can.”

Playing stiff competition within the league isn’t anything new for the Rebels, who have already played Eastern Division leader Kentucky and No. 13 LSU in addition to Mississippi State, but Ole Miss has only two combined wins against those teams. The Rebels, who sit at No. 40 in the RPI following their series win over Missouri, have four top-25 RPI wins and are just 6-11 against the top 50.

It leaves Ole Miss needing more quality wins down the stretch if it wants the season to extend beyond Hoover come late May.

The Rebels have just 12 SEC games left in the regular season — the Governor’s Cup doesn’t count toward the league standings — and likely need to win at least half of those to solidify an at-large berth in the NCAA Tournament. D1Baseball.com has Ole Miss projected as a 3 seed in the Morgantown (West Virginia) Regional while Baseball America doesn’t have the Rebels among the field of 64 in its latest projections, both of which were released before last weekend’s games.

Only five of Ole Miss’ remaining games are at home with the only league series left at Swayze coming against Texas A&M May 12-14. The Rebels will end the regular season at Auburn, another top-10 team.

“ I think that’s the beauty of the SEC in baseball is you’ve got to show up every weekend,” Bianco said. “Certainly if we take care of our business and win our games, then we’ll be in good shape at the end of the season. But like every season, you’ve got to finish and you’ve got to win your games.”

With the short week, Bianco said the weekend rotation will stay the same with reigning SEC Freshman of the Week Ryan Rolison getting the ball against Arkansas on Friday and David Parkinson closing the series out Saturday. James McArthur will start the series opener Thursday.

Dallas Woolfolk was still dealing with some shoulder tightness Monday that made him unavailable to pitch Sunday, but Bianco said his closer “will be fine” to throw against Mississippi State if needed.