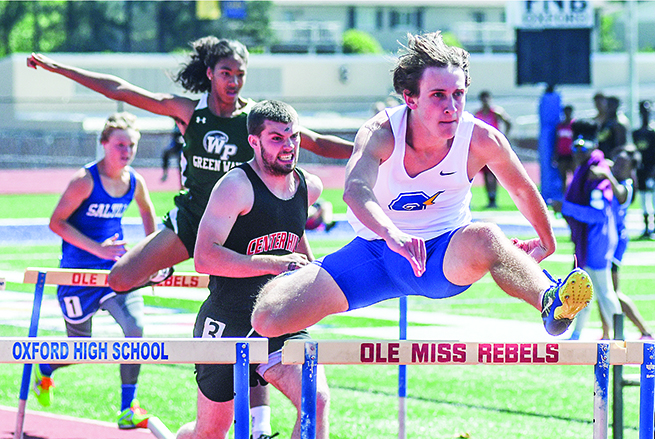 The search for a third consecutive state championship took another step in the right direction on Monday as the Oxford High boys track & field team lapped the competition on their way to the Region 1-5A meet title at Bobby Holcomb Field. The girls team had a solid showing, placing second.

The meet was pushed back to Monday after the original date of last Saturday was rained out.

“It was a very good day,” Oxford boys head coach Chris Bush said. “I was very proud of how they competed. We had some guys we were watching with injuries here and there, but it’s a testament to the team. They lay it on the line and that’s all we can ask for day-in and day-out. If they continue to do that then I think we are in a good position heading into (North Half meet).”

The top for finishers in each even advance to Saturday’s 5A North Half meet, which will also be held at Bobby Holcomb Field, and Oxford will be well represented, sending 22 athletes and four relay teams on the boys side.

In the field events, Oxford won four of the six. D.Q. Thomas won the discus throw with an attempt of 148-feet, 1o-inches. Thomas also placed second in the triple jump. Quentin Wilfawn won the shot put with a throw of 47-07. Devin Rockette won the long jump as well as the high jump. Jackson Dear placed second in the pole vault.

Jared Redding swept the hurdles, winning the 3oo and 110 meter races while John Owen Yoste swept the long-distance races of 1600 and 3200 meters. Kyle Rock won the 800 meter run. It was another clean sweep in the dashes for Oxford with Jaquan Webb winning the 100 and 200 meter dashes and Cameron Epps won the 400 meter dash.

On the girls side, the Chargers placed second with 221 points, finishing 17 points behind winner Center Hill (238). The meet might have been a lot closer or a little more interesting in the final stages if Oxford did not get disqualified in a key event.

During the 4×100 meter relay, Khadijah Ramsey dropped the baton during he second exchange of the relay, forcing the Chargers to be disqualified from the race. Initially it was considered only a cramp that caused the mishap, but there will be further tests on Ramsey who is done for the season.

“It doesn’t hurt as much dropping the baton, but we did lose a key sprinter,” Oxford girls head coach Chris Patton said. “That hurt a lot because that’s points in the 4×100 relay and (Ramsey) is our best 200 sprinter, best in the state. That hurt a lot. Everything doesn’t always go your way, but it’s how you bounce back and respond the following week.”

Despite the injury, Oxford had a solid day with 10 first place finishes in the 18 events. They won the three other relay events as well as sweeping the long distance runs with Addie Thompson placing first in the 1600 and 3200 meter runs.