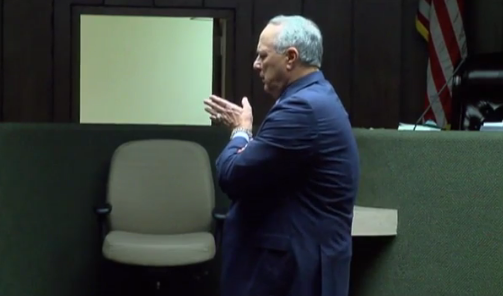 Mississippi attorney Steve Farese sealed yet another courtroom victory last week when a jury acquitted his client, Tennessee businessman Mark Giannini, of raping a woman who testified he assaulted her during a job interview in 2014.

Farese’s closing argument has drawn national attention and for good reason. At one point, he addressed the jury—made up of nine women and three men—and decided to momentarily detach from the case at hand to make an utterly preposterous generalization.

“People can be very good at lying,” Farese said. “Women can be especially good at it because they’re the weaker sex and we … and we want to protect them and not have anybody take advantage of them. At least I do.”

It was a stunning exclamation point on a defense painting Giannini’s accuser as a desperate single mom with no skills who was out for money. To strengthen his argument that the sex was consensual, Farese even invoked the disturbingly illogical she-was-asking-for-it argument, suggesting the accuser’s decision to show up to the job interview in a halter top—or as Farese called it, a “contraption”—made her story less believable.

When asked about his remarks, Farese told The Commercial Appeal it isn’t his job “to care if anybody gets offended,” adding that “smart people will see it for what it is.”

Farese is right: His job is to win cases, and he did that. He also amplified some of the primary reasons why sexual assault is often a crime that lives and dies in the silence of a victim who fears no one will believe them, or even worse, that they will be blamed for the assault occurring to begin with.

Here’s what we know about rape in the U.S.: Most cases aren’t reported and only about 10 percent of those that are lead to an arrest, with a much smaller percentage leading to prosecution and jail time. With the burden of proof on rape victims, cases that do make it to trial are rarely cut and dry, even with physical evidence.

When it comes down to the accuser’s word versus the attacker’s, which essentially is what happened in Giannini’s case, victims can be exposed to unfair scrutiny about their behavior surrounding the incident, from how they were dressed to how much they had to drink, as if these details somehow diminish the victim’s right to say no at any point during a sexual encounter.

When a rape victim comes forward, he/she does so knowing that even when armed with evidence, there’s still a painfully small chance of their attacker being punished. And when lawyers like Farese resort to pathetic rhetorical tactics to sway a jury, they aren’t just “doing their jobs,” no matter how much they try to detach themselves from their work. They are amplifying the obstacles rape victims face when questioning whether to come forward and reinforcing stereotypes about whether women can be trusted and how they should conduct themselves if they don’t want to be sexually assaulted.

And Farese thinks the backlash is about people being offended?

Women are conscious of the systemic challenges facing us in nearly every aspect of our lives. The problem here is not a matter of being insulted. The problem is Farese’s apparent lack of understanding or consideration when it comes to the thriving culture of silence that often makes rape victims invisible. It’s how Baylor happened. It’s why women have a 1 in 5 chance of being raped in their lives. It’s why hundreds of thousands of rape kits have gone untested in this country, including thousands in Memphis alone, due to stories being doubted for one reason or another.

Following last week’s verdict, Farese was understandably pleased with the decision, saying his client—who remains behind bars due to pending rape cases of two other women—was finally vindicated after being “convicted in the court of public opinion.”

It’s a court that rape victims, particularly women, know all too well, and it thrives on tolerating the narrowminded sexism that convicts them, or even worse—keeps them silent.

Alex McDaniel is Editor of The Oxford Eagle and Oxford Magazine.