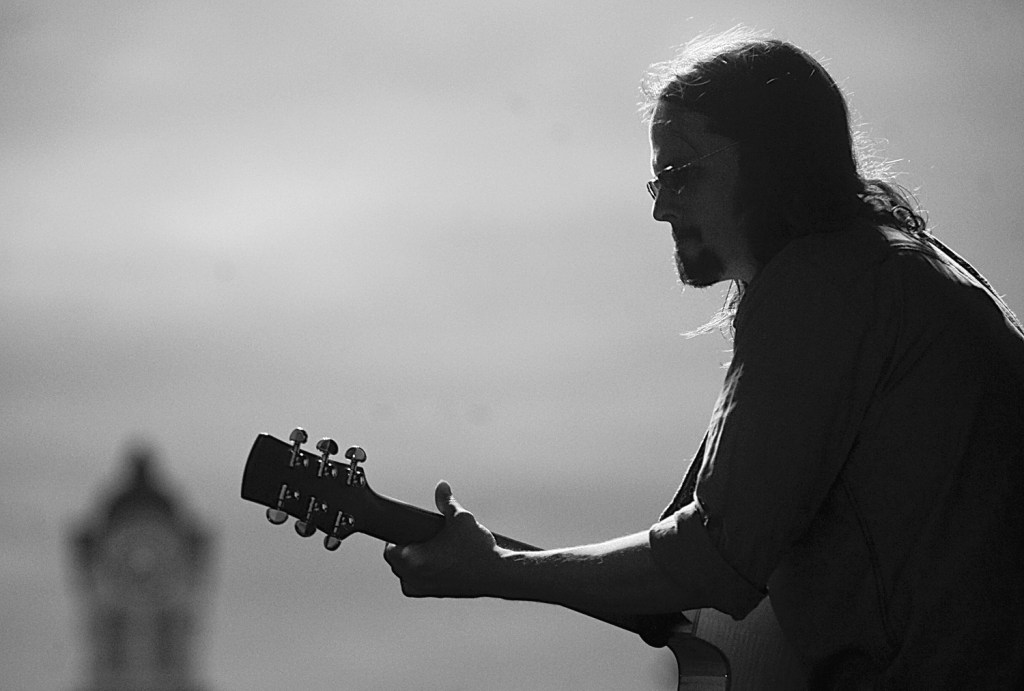 Arguably one of the most iconic and representative photos ever taken at the Double Decker Arts Festival, Luther Dickinson and the North Mississippi Allstars rocked the main stage in 2011. Luther returns this year as a solo artist scheduled for 5:30 Saturday afternoon.

Luther Dickinson has been keeping the Mississippi Hill Country blues alive for quite a while now. He learned at the feet of legendary bluesmen R.L. Burnside, Junior Kimbrough and Otha Turner as a kid in Hernando, formed his own band with his brother Cody Dickinson, the North Mississippi Allstars, jammed with the soul-rock band The Black Crowes and when he’s not doing solo shows like his Double Decker gig Saturday at 5:30, tours with Soul Assembly — a collection of incredible Southern musicians including Dickinson, JJ Grey, Marc Broussard and Anders Osborne.

A self-proclaimed “psychedelic blues rocker,” the Grammy-nominated guitarist also has some new music out with the Allstars, who are celebrating 20 years together. “Prayer for Peace” hits record stores on June 2 and Dickinson calls the live album a “wild rock ‘n’ roll record.”

“It’s kind of hard to capture the live spirit of a band like that, but this record comes close,” Dickinson told CMT in a recent interview.

The album was recorded while on tour in various studios in Austin, Brooklyn, Kansas City, St. Louis and at the family studio in Mississippi.

Dickinson also has a solo album, “Blues & Ballads,” which he calls a folksinger’s songbook, which has gotten great reviews. It was nominated for a Grammy in 2017 in the Best Traditional Blues category.

“It’s very, very pared down, it’s very acoustic and it’s all live,” Dickinson said in an interview recently with Down at the Crossroads magazine. “Buddy Miller, the guitar player and producer in Nashville, he really turned me around. He told me – because we were jiving each other about working together because he’s busy and expensive!; and I was like, come on, Buddy, just produce this, and he was like, look, just don’t overdub. And it’s so true, just commit to live vocals; and if you need a fiddle player, then call the fiddle player, and if you need background singers, then call ‘em up and wait for them. Get everyone in one room and capture a real performance.”

Much of the album came about during the illness of his father, legendary musician and record producer Jim Dickinson, who passed away in 2009. Some have called “Blues & Ballads” a folk-blues-rock album. Dickinson says it’s just what he knows.

“It’s a very humble, simple folk record and I made a traditional sound book out of it,” Dickinson said during a Facebook live chat at the Grammy Museum in Los Angeles. “It’s like an art project and that definitely comes from my father. He was awesome.”

Jim Dickinson was Luther Dickinson’s musical hero and inspiration, who played with the likes of the Rolling Stones, Aretha Franklin and Bob Dylan and bluesmen Albert King and Albert Collins.

“Watching my Dad play guitar, play piano, go to the recording studio, there was never any question in my mind what I wanted to do with my life,” Dickinson said.

Asked why blues music has endured, Dickinson said it’s the human quality to it that brings people together.

“… what I play is not Delta Blues, it’s psychedelic folk blues rock, you know – that’s just where I am – but I grew up in Mississippi, second generation musician studying songs and blues, and I will claim that what I do is modern day blues. But it’s like what Buddy Guy says, I got ten fingers, I got two hands, I can play some blues!”