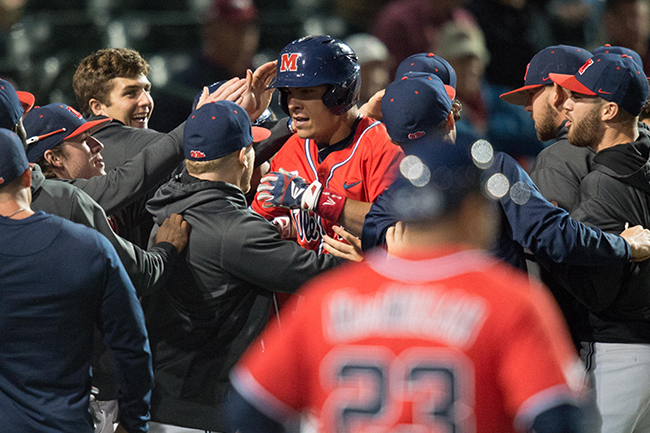 Ole Miss hit four home runs to back James McArthur’s career-long outing, and the Rebels separated from No. 15 Arkansas for a 9-1 win in the series opener Thursday at Baum Stadium.

The teams will wrap up the series Friday with a doubleheader starting at noon with the threat of inclement weather in the Fayetteville area Saturday.

The Rebels (26-16, 10-9 Southeastern Conference) banged out 11 hits with three of their homers and seven of their runs coming over the final two innings. Colby Bortles went deep twice and drove in four runs while Tim Rowe went 3-for-3 with three RBIs.

Tate Blackman hit a two-run shot for Ole Miss, which moved a game above .500 in SEC play with its fifth top-25 RPI win.

McArthur (3-3) had not gone deeper than seven innings in any start but threw 114 pitches to go one frame further. The sophomore right-hander retired 12 of the first 13 batters he faced and took a no-hitter into the fifth before Jared Gates broke it up with a leadoff homer.

It was the only hit Arkansas (33-11, 12-7) mustered in eight innings against McArthur, who walked two and struck out six to lower his earned run average to 2.82 after allowing 10 earned runs in his previous two starts.

Chad Spanberger’s double in the ninth off Will Ethridge was the Razorbacks’ only other hit.