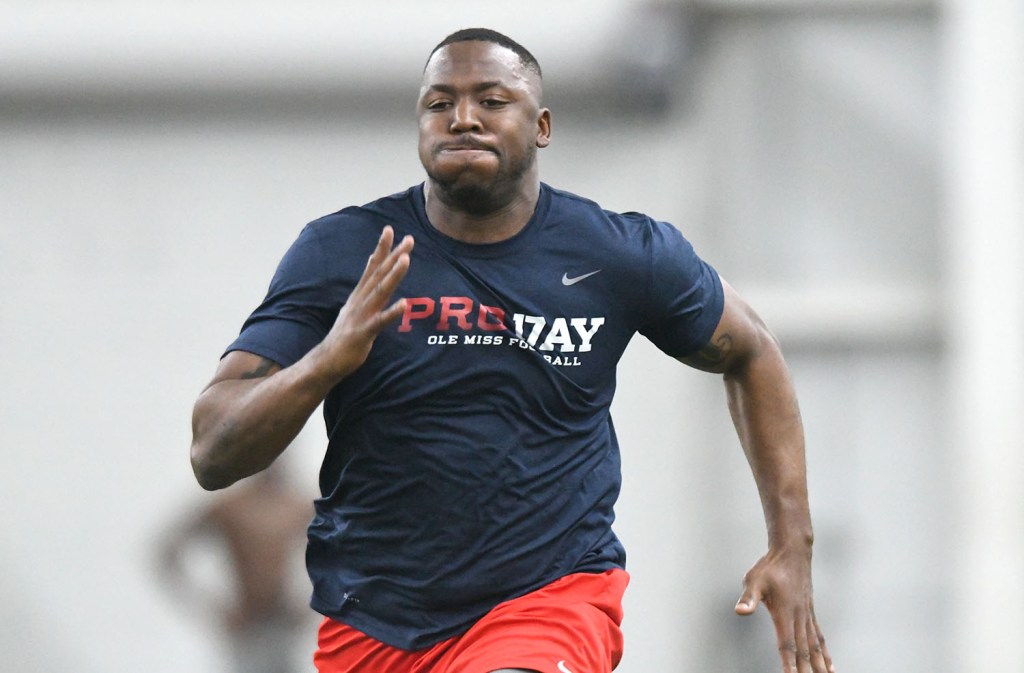 Tony Conner could be bitter, but he’s not.

Playing in the NFL, which Conner says would be “a dream come true,” is still a possibility for him. The former Ole Miss safety says he’s talked to numerous teams leading up to this year’s draft, which will begin tonight and run through Saturday, and has heard he could be selected as early as the fifth round.

The projections aren’t as optimistic.

DraftWire has Conner being taken in the seventh and final round by the Denver Broncos — ironically one of the teams Conner says he’s talked with the most — with the 252nd pick. There are only 253 total selections. NFLDraftScout.com has the former All-Southeastern Conference performer going undrafted.

“Getting back to my old self, I think I might be a steal for somebody, whoever picks me up,” Conner says.

It’s a surreal statement from Conner considering there was a time he would’ve been anything but.

Conner was the other five-star prospect in the Rebels’ 2013 signing class, joining Robert Nkemdiche, Laremy Tunsil and Laquon Treadwell as the crown jewels of what was the highest-ranked recruiting class in school history at the time. Starring at prep powerhouse South Panola in nearby Batesville, Conner was an Under Armour All-American his senior season and ultimately rejected the advances made by Nick Saban’s dynasty at Alabama to stay home.

“Just trying to do something special for Mississippi and put Mississippi on the map,” Conner says.

A perfect 6-foot, 213-pound fit for the do-it-all nickel corner position in former coordinator Dave Wommack’s 4-2-5 defense, Conner was an impact player for the Rebels from Day 1. He had an interception on the first defensive series of his career, and his physicality showed up with a combined 135 tackles and 14 tackles for loss his first two seasons.

Conner was listed with his three classmates among ESPN analyst Mel Kiper Jr.’s top 20 prospects for the 2016 draft heading into his junior season, but the knee injury he suffered during Ole Miss’ 43-37 win at Alabama that fall ended the first-round speculation. Conner became a shell of himself after tearing his meniscus and having some bone chipped away while being chopped down on a blitz.

“I think the coaches knew I really wasn’t 100 percent,” he says, “but I was still just doing my best to give it my all.”

Conner can’t say for sure that he would’ve left early for the NFL had he not suffered the injury given that he’s close with his parents, who stressed the importance of getting his degree, though he admits that was always his plan. Instead, the injury made the decision for Conner, who watched Tunsil, Treadwell and Nkemdiche each get selected in the first round of last year’s draft as he underwent two surgeries to repair the damage.

“Knowing that those guys like Robert Nkemdiche, Laquon and Laremy, guys that you came in with and guys you talk with a lot and you played three years with, it was a blessing and I was happy,” Conner says. “I was more happy for those guys.”

The multiple operations got Conner back on the field last fall, but he says he was only about 70 percent healthy. His explosion lacked while his reactions and his feet were a step slow. He switched to a lighter knee brace during the season, but Conner says just wearing one did more harm than good at times.

“It was frustrating,” says Conner, who had just 41 tackles last season. “With that brace on, it’s a target for teams to come to you. Just being out there, you had to watch yourself carefully. I couldn’t really just move around like I normally could without the brace, and it kind of slowed me down running or doing a lot more things that you normally would do.”

Conner went to Phoenix after the season to train at Performance Enhancement Professionals, which he credits for helping him move past the injury for good. Conner has shed the brace and says he no longer feels any pain in his knee, adding that it’s become less of a mental hurdle.

“When I go work out or anything, I get out there and just go,” Conner says. “I try not to have it on my mind.”

But it’s something NFL teams are constantly concerned about with Conner, who says the knee is “absolutely” the first topic of conversation. Conner got a chance to provide some answers earlier this month at Ole Miss’ pro day — Conner’s only opportunity to perform in front of league personnel before the draft since he wasn’t invited to the NFL scouting combine and didn’t work out privately for any teams.

With the brace gone, Conner ran the 40-yard dash in 4.75 seconds and did 15 repetitions of 225 pounds on the bench press. Playing with a physical edge comes naturally to Conner as a safety who’s spent most of his career attached to the box, but Conner, who had just one other interception in his four year at Ole Miss, is still working to improve his speed and range of motion in order to show teams he can keep up with NFL passing games.

For now, the work is done. All Conner can do is wait.

He mentions the Cleveland Browns, New York Jets, Miami Dolphins and Las Vegas Raiders as other teams he’s had conversations with. If there’s a team that rivals the Broncos in keeping in contact with him the most, Conner says, it’s the Raiders.

But Conner isn’t going into the draft with any expectations. He knows he may have to go the free-agent route with so many teams skeptical about an injury that reduced Conner’s production to 58 tackles over his final two seasons with the Rebels.

Conner is set to graduate in May with that degree in general studies if football doesn’t work out, but he wants to give it that long-awaited shot at the next level first.

“I just put it all in God’s hands and just wait until draft day. It’s right around the corner.”