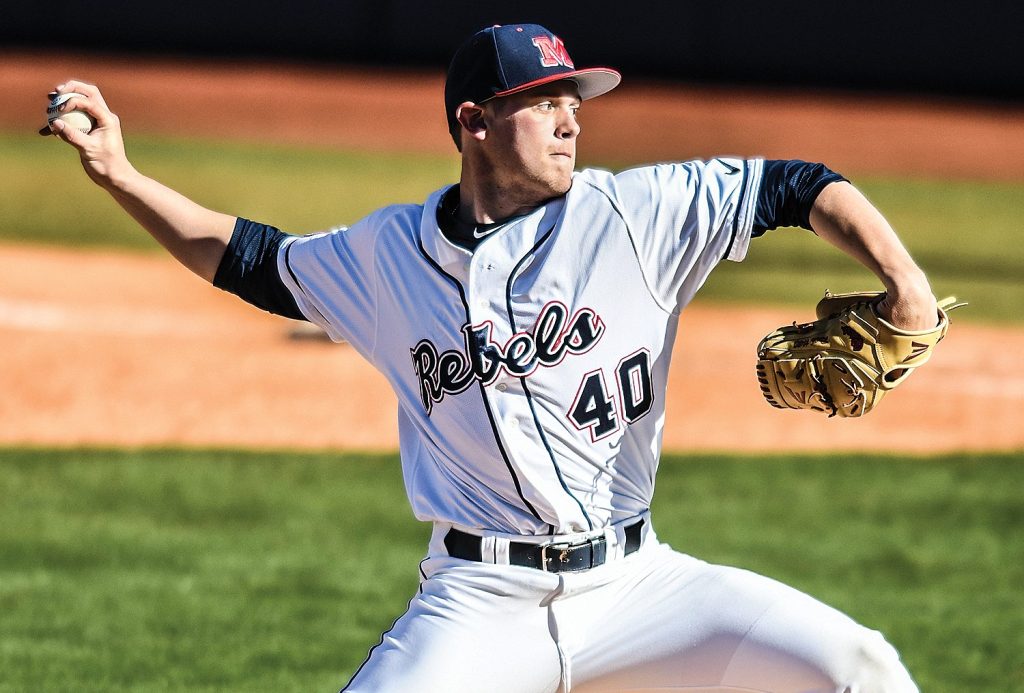 They’re shorter than what he’s used to, but Houston Roth’s outings at Ole Miss have looked a lot like the ones he had in high school.

That’s a good thing for the Rebels.

Roth has moved to the bullpen as a freshman after spending the last handful of years as a starter at nearby Oxford High School and is quickly establishing himself as one of Ole Miss’ more reliable relievers. The 6-foot-3 right-hander has a staff-best 1.00 earned run average in 12 appearances with 26 strikeouts in 18 innings heading into tonight’s series opener at No. 15 Arkansas (6, SEC Network).

Opponents are hitting just .212 against Roth, who’s allowed two earned runs all season. His role is the only thing that has changed.

“It’s generally the same thing because what you’re trying to do is go out there and make a pitch,” Roth said. “It’s not necessarily that I’m starting an inning so I’m going to change what I do. I’m sticking to it, making the pitch and getting a guy out.

“It’s been exciting to be able to get in and get some innings. Done well so far.”

Roth joined high school teammates Grae Kessinger, Thomas Dillard and Jason Barber at Ole Miss as part of the Rebels’ No. 1-ranked recruiting class after a stellar career at Oxford, where he lost just twice and went 19-1 with 14 complete games over his final two seasons in helping the Chargers win back-to-back MHSAA Class 5A titles.

But being part of a class that talented meant joining other high-end arms like Will Ethridge, Greer Holston and left-hander Ryan Rolison, who’s already in the weekend rotation. With the Rebels having nine pitchers back from last year’s team, Roth wasn’t sure he’d throw at all this season.

But an injury to senior Sean Johnson just weeks before the season began created an opportunity, one Roth has seized.

“Some other guys were going to have to pick up some innings,” Ole Miss coach Mike Bianco said. “He’s worked so hard this fall and then this spring and really in that break over December and in January. I don’t know that we’ve had a pitcher that works harder than he does. It was probably right up to about a week or so before the season started (that I decided he’d pitch this season), but he’s been terrific in almost every outing he’s had.”

Change for the better

Roth said developing a changeup to go with his high-80s fastball and slider has helped him against more polished hitters at the collegiate level. It’s a pitch he rarely used in high school because he didn’t have to.

“I could probably count on one hand how many times I threw a changeup in high school,” Roth said.

But Roth knew he’d need a consistent third pitch to be as effective as he wanted to be going against lineups in the Southeastern Conference. He said he sought advice from teammates and picked up on different grips from Bianco, who values a significant dip in velocity more than movement when it comes to the pitch’s effectiveness, Roth said.

Repetition has been vital to the pitch’s evolution for Roth, who said he even occasionally uses a changeup grip when long tossing.

“Developing a changeup this year, it’s been big for me,” Roth said. “The changeup mixes up people from sitting on a fastball or a slider. Just been hitting my spots and making pitches with all three.”

Said Bianco, “He’s a guy that can throw it to both right-handers and left-handers. It’s been a good pitch for him.”

As a middle reliever who’s tasked with bridging the game from the starter to the back end of the bullpen, Roth is often using his pitches in high-leverage situations. In his last outing Sunday in Ole Miss’ 9-6 win over Missouri, he stranded a runner in the fifth inning before wiggling out of a two-on, no-out jam in the sixth with a pop-up and a strikeout after catcher Cooper Johnson caught a runner stealing.

“You do have a little more adrenaline to you (as a reliever),” Roth said. “I’ve seen a little velocity jump this year, so I think that probably has a little something to do with it knowing that I’ve got to make a pitch right now.”

Missouri scored two runs against Roth in the eighth, but neither was earned as the defense committed a pair of errors in the frame. He went a season-long three innings, running his streak of consecutive innings without allowing an earned run to eight.

“With all the freshmen that we’ve talked about so much, really he goes unnoticed by a lot of people, but his numbers are as good as anybody,” Bianco said. “Throws three premium pitches into the zone and makes it really difficult for hitters.”

Where Ole Miss’ prospects are projected to go in…