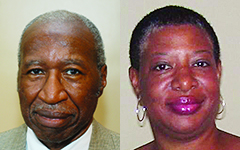 Long-time Ward 5 Alderman Preston Taylor will face off against fellow Democrat Theressa “Terry” Hilliard in an attempt to retain his seat earlier than most of his fellow aldermen. He and Hilliard will run in the primary election on Tuesday. Since a Republican did not qualify to run for the Ward 5 seat, whoever wins the primary will be an alderman.

Polls will be open from 7 a.m. to 7 p.m. and all Ward 5 residents will cast their vote at the Oxford Conference Center.

Hilliard grew up in Oxford, then moved to Texas until 14 years ago when she returned home. She has held administrative positions at the University of Mississippi and several banks. She is married to Alonzo Hilliard and they have four adult children and nine grandchildren.

Hilliard served on the LOU Home Inc. committee and says the city needs to address its lack of affordable housing issue, which she believes is the biggest issue facing Oxford currently, and also the main reason she decided to run for office.

“As alderman, I will address it by being in the position to be a voice for those who are affected by the housing issue,” she said. “I’m not saying I can fix things overnight, or that I am the only one who can fix it, but I can say I’m willing to put myself in a position to try and make a difference.”

Taylor, a retired schoolteacher and life-long resident of Oxford, said his track record over the last 16 years proves he fights for the citizens in his ward and also believes the city needs more affordable housing.

“That’s something we’re right now working on,” Taylor said. “We’ve taken some good steps. We need housing people can afford to live in for those people who work here.”

Hilliard believes increasing workforce wages could help balance things out by allowing lower-income workers to be able to live where they work.

“We have to consider every citizen of Oxford when making decisions,” she said.

Taylor said he’s spent the last 16 years fighting for his fellow Ward 5 residents by concentrating on quality-of-life concerns that include getting sidewalks along Ward 5 streets, cleaning up Price Hill pond and having more lighting installed alone Hathorn Road.

He says growth is the city’s biggest challenge, which encompasses housing problems, traffic and infrastructure.

“We need to have the infrastructure in place to accommodate the growth,” he said. “We need more roads and to have city services updated to meet the growth demands.”

Hilliard says she’s the best candidate for the job and is willing to step up and take on the role and responsibility of being an alderman.

“I will do the best job possible in my district and the Oxford community as a whole,” she said. “I’ve always had a passion for helping others and this is a way to do that on a bigger scale. I also see the growth in Oxford and want to be a part of helping it grow in a way that will benefit everyone in our community and not just a few.”

Being an alderman for 16 years, Taylor has won four elections and said he isn’t ready to stop taking care of Ward 5 residents.

“I love Oxford and have a commitment to this city,” he said. “It’s in me to serve and I have tried to make a difference.”