Storm kills two people from Mississippi including a 7-year-old 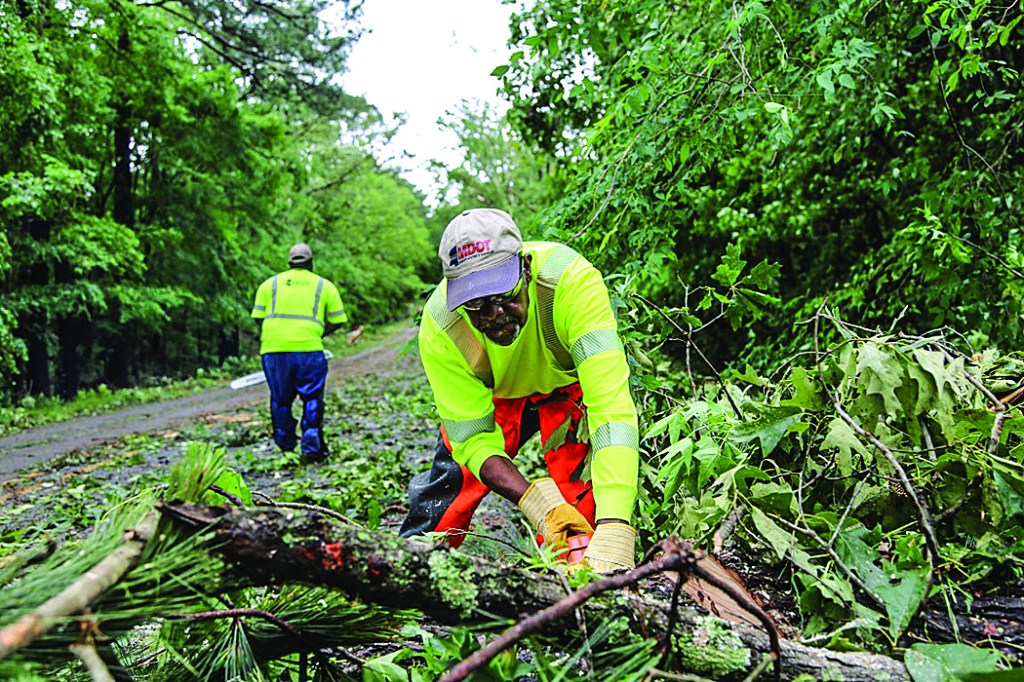 Mississippi Department of Transportation crews use chainsaws to clear roads following a storm that passed through central Mississippi on Sunday.

ATLANTA (AP) — Parts of the Midwest and the South were recovering Monday after a weekend round of storms, winds, hail and isolated tornadoes killed at least 14 people.

And a chance remained for more severe weather in the South. Parts of the Florida Panhandle, Alabama, Georgia and Mississippi could be affected by severe thunderstorms, according to the National Weather Service.

Tornadoes hit several small towns in East Texas, killing four people. Flooding and winds killed five people in Arkansas, including a fire chief who was struck by a vehicle while working during the storm.

Two deaths were reported in Missouri, including a woman who drowned after rushing water swept away a car. One of two deaths in Mississippi included a 7-year-old who died by electric shock and a 2-year-old girl died in Tennessee after being struck by a soccer goal post thrown by heavy winds.

The storms rolled through Louisiana, Mississippi and Alabama on Sunday with strong winds causing isolated pockets of damage.

In Durant in central Mississippi, one person died in the storms. The Mississippi Emergency Management Agency didn’t give details. Later Sunday the agency reported the death of a child from Rankin County, 20 miles east of Jackson, who died from electric shock in flood waters. The Rankin County Sherriff’s Department reported that a 7-year-old boy had unplugged an electric golf cart and dropped the cord in water on the ground and was shocked.

Alexa Haik went to bed Saturday night expecting just rain, but heard the sirens Sunday morning and turned on the television to see the tornado warning. She rounded up her pets and hid in a hallway with her family, then was stunned to emerge to trees down in her neighborhood in Clinton, about 20 miles west of Jackson.

A trip up the road showed how isolated the worst of the storms were.

“I really thought when we got out of our neighborhood, there would be damage everywhere. But our little subdivision was the only one hit,” Haik said.

A 2-year-old girl in Tennessee died after being struck by a heavy, metal soccer goal post that was blown over by high winds, The Metro Nashville Police Department posted on its Twitter page Sunday evening. Melanie Espinoza Rodriguez was transported to a local hospital where she was pronounced dead, according to a second post from the department.

In northwest Arkansas, a 10-year-old girl drowned in Springdale and the body of a woman who disappeared riding an inner tube Saturday was found in a creek in Eureka Springs. Also, a 65-year-old woman in DeWitt in the eastern part of the state was struck and killed in her home by a falling tree, officials said.

Cove Creek/Pearson Fire Chief Doug Decker died shortly before 4 a.m. Sunday after being struck by a vehicle while checking water levels on Highway 25 near Quitman, about 40 miles north of Little Rock, Trooper Liz Chapman said. It wasn’t known if he will be included as a storm-related death, she said.

Flooding closed part of Interstate 44 near Hazelgreen, Missouri, and officials expected it would be at least a day before the highway reopened. Interstate 70 in western Kansas was closed because crews were waiting for snow falling at 3 to 4 inches an hour being blown by 35 mph winds to subside.

Near Clever in southwestern Missouri, a man tried to save his 72-year-old wife from floodwaters that swept away their vehicle Saturday, but her body was found when the water receded, the Missouri State Highway Patrol said.

The second death from weekend flooding was announced Sunday by Missouri Gov. Eric Greitens but he did not release any details about the victim or the circumstances of the death.

In Texas, search teams were going door to door Sunday after the tornadoes the day before flattened homes, uprooted trees and flipped several pickup trucks at a Dodge dealership in Canton.

“It is heartbreaking and upsetting, to say the least,” Canton Mayor Lou Ann Everett told reporters at a news conference Sunday.

The storms cut a path of destruction 35 miles long and 15 miles wide in Van Zandt County, Everett said. The largely rural area is about 50 miles east of Dallas.

The National Weather Service found evidence of four tornadoes with one twister possibly on the ground for 50 miles (80 kilometers).

“We’d be out there working and get a report of another tornado on the ground,” he said.