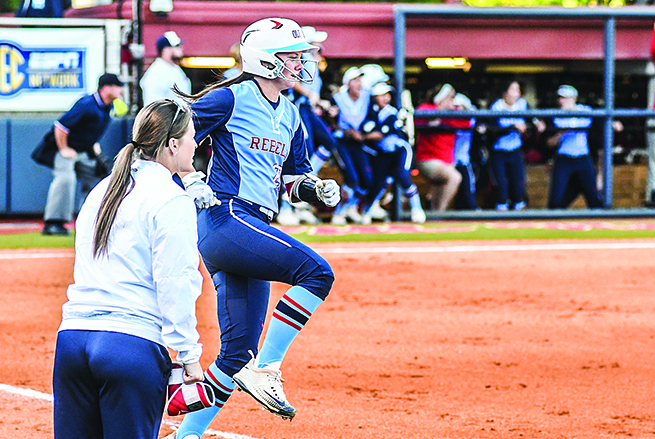 There’s only one way to describe No. 20 Ole Miss softball’s recent success at home: magical.

For the fifth time in the last two weeks, and the ninth time this season, the Rebels (34-17, 8-13 SEC) walked off, this time coming from behind in a wild, Monday night, nationally-televised game. The final four runs in the game – two from Alabama in the fifth, then two from Ole Miss in the seventh – were all unearned as an error by both defenses changed the game twice.

Not only that, No. 13 Alabama had a run taken off the scoreboard in the third when Bailey Hemphill hit a home run, but never touched home plate, keeping the score at the time 3-2. But, at the end of it all, the Rebels came out on top for their first-ever series win over the Tide (39-13, 11-9 SEC), and third SEC series win of the year.

The Rebels recorded only three hits, but took advantage of six walks by Alabama starter Alexis Osorio. She settled in midway through the game to retire 14 Ole Miss hitters in a row, 10 via strikeout, but Ole Miss put that all aside in the seventh.

It was the second inning that gave Osorio (19-7) the most trouble as she walked three and allowed two hits. Sarah Van Schaik led off with a walk, before Dakota Matiko pinch ran and stole second. Dylinn Stancil then walked with one out, before Grayce Majam, on her birthday, fought off a nine pitch at-bat to also walk and load the bases. Paige McKinney then stepped in and delivered with a hard RBI single up the middle scoring Matiko to put Ole Miss in front 1-0.

All the runners held up on the single, allowing Courtney Syrett to also bat with the bases juiced. She came up a few inches shy of a grand slam as she smoked one off the left field wall, scoring Stancil and Majam, extending the lead to 3-0.

Alabama though responded in its next chance at the plate, with a 1-out bloop single into right, before Marisa Runyon cranked one to right that cut the lead to 3-2. That’s when Hemphill stepped in and blasted one over the fence in left, in what looked to tie the game up at 3-3. But, an appeal at home negated the run as the umpire declared she never touched home plate, resulting in a triple in the scorebook, but an out to end the inning.

The Tide threatened again in the fourth with a pair of singles, but Kaitlin Lee (15-9) worked a strikeout, one of her five, to end it and keep the game 3-2.

Alabama took its 4-3 lead in the fifth when they put two on after a HBP and single back to the circle.