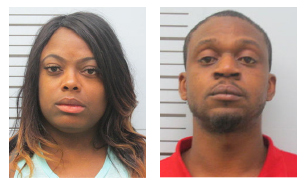 Paulette Clayton and Mario Collins were convicted Tuesday for human trafficking at the U.S. District Court in Oxford.

Two Georgia residents were arrested last week for allegedly kidnapping a woman in Georgia and bringing her to Oxford for the purpose of using her for prostitution.

According to the Oxford Police Department, on April 27, officers responded to the University Inn for a reported kidnapping.

The alleged victim texted a friend her location and a vehicle description of the car she was in, who then notified law enforcement. When officers arrived, they observed a vehicle matching the description in front of a room at the motel. Officers spoke with the occupants of the vehicle, Mario Collins, 36, and Paulette Clayton, 25, both from Tucker, Georgia.

Officers asked Collins to step out of the vehicle and as he did a handgun fell from his pants. Both Collins and Clayton were detained at that time.

The victim was then located inside a room at the motel and advised responding officers that she had been held at the hotel at gunpoint. The victim also advised that she had been brought to Oxford from Georgia for prostitution purposes. Upon initial investigation, it was determined that due to offenses crossing state lines the FBI was contacted.

A search of the vehicle was conducted and various drugs, including methamphetamine, cocaine, marijuana and Xanax were found. Investigators also discovered Collins was a convicted felon and was possessing a firearm.

The gun and drugs were seized and Collins and Clayton were booked into the Lafayette County Detention Center where they were booked on a charge of promoting prostitution. The FBI is investigating the alleged kidnapping, human trafficking, weapons and drug possession and more charges are expected to be filed by the FBI.